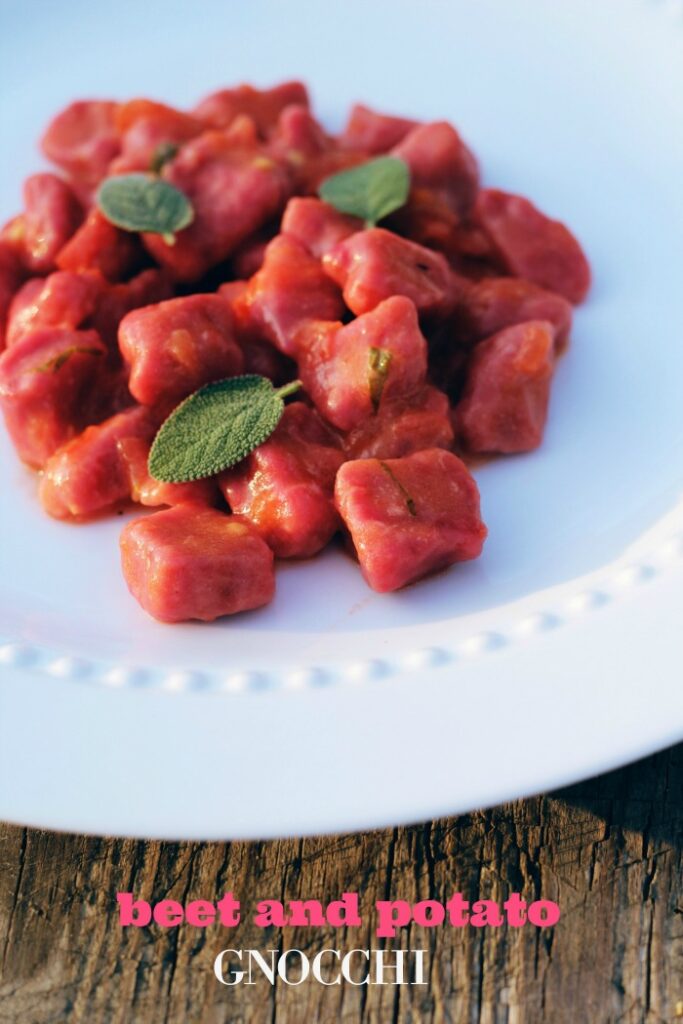 There may be only a handful of my friends that would rush over to eat beet and potato gnocchi -gnocchi di barbabietola, and they are really smart friends! Seriously, I haven’t met anyone yet that hasn’t been a fan of potato gnocchi, but throw in beets and they may wonder what in the world is going on in our kitchen.

I’m a huge, I mean HUGE, fan of beets. I love red beets and golden beets. I love them shredded and raw and I especially love them roasted and added to a fun salad like this one. I love beet juice! I love the color and I love how my fingers turn red when I clean the red beets. I can’t say that I particularly love canned beets, for me, the fun is all in the preparation of the beets. So on to these gnocchi.

I’ve been so excited to attempt to make and photograph them for all of you! It was a long, long time ago when I shared these gnocchi with a Bolognese sauce. Can I tell you how messy it is to make gnocchi and try to photograph them at the same time, especially when you add red beets? Truly, not an easy task. But I was determined to get this together and finally photograph them. I promise to be back with some more homemade pasta or Italian dumplings. Maybe I’ll find someone to help me photograph them!!
I had my beets sitting in the fridge for a while, and I was sure they had given up on me and my crazy idea. Luckily, they were still waiting for me and there was really nothing to stop me. Except maybe my husband who said making and photographing them would be a little messy. It didn’t seem as if he was too interested in assisting me. It was his night off and he even invited a chef friend to stop by. SO there you go, no pressure or any thing. Just me and my roasted beets and my cooked potatoes and my sticky dough trying to come together and look cool while the chef friend is looking over at my pasta board asking my husband in Italian if I was making beet gnocchi. And he asked it in a way that seemed he was about to make a critique. I was working the dough and looked over at him and asked him if it seemed like it was going ok, and he said that’s how he makes his beet gnocchi. So I kept on plugging ahead with my gnocchi while my husband continued talking with him and invited him to stay for dinner. He also didn’t seem to interested to jump in and help me on his evening off, so I kept plugging ahead and photographed what I could of this fast and sticky process. 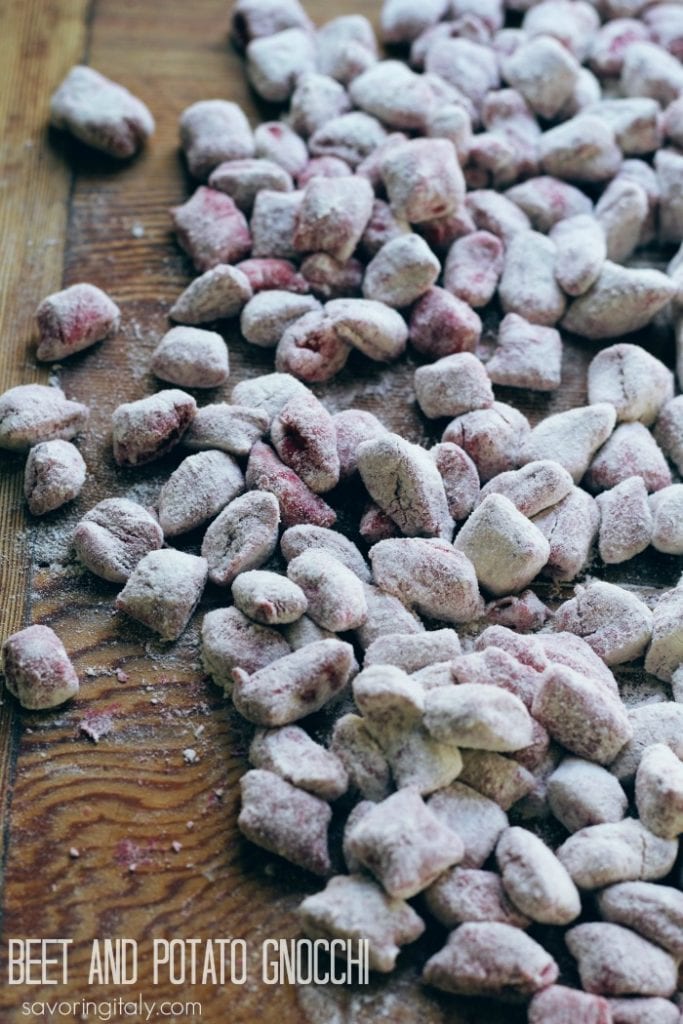 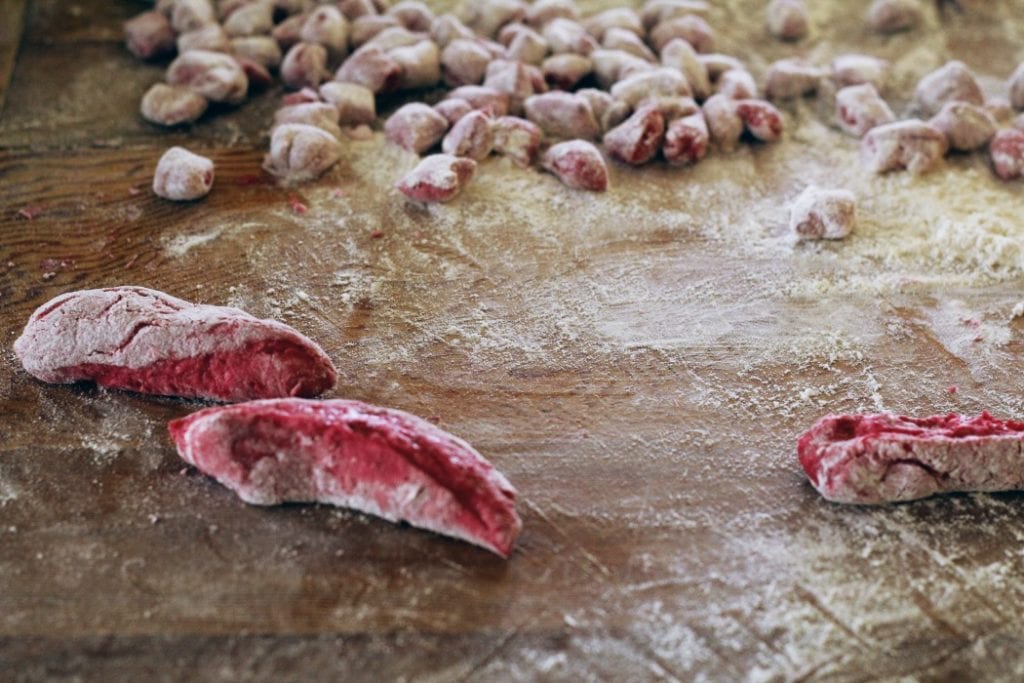 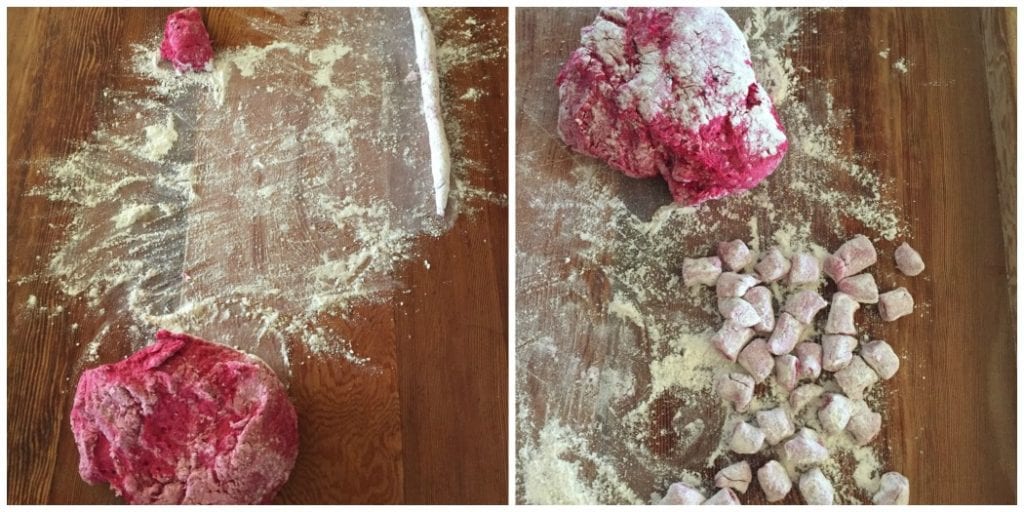 I wanted to have just a simple butter and sage sauce. The sage we used was from my herb garden. We then added in some fresh chopped tomatoes. There was a stick of butter, a handful of the fresh sage and about 2 cups of chopped fresh tomatoes, salt and pepper. We weren’t following a recipe (like many of the Italian savory dishes I do!). If you want to skip the tomatoes, a simple butter and sage sauce would be just perfect! 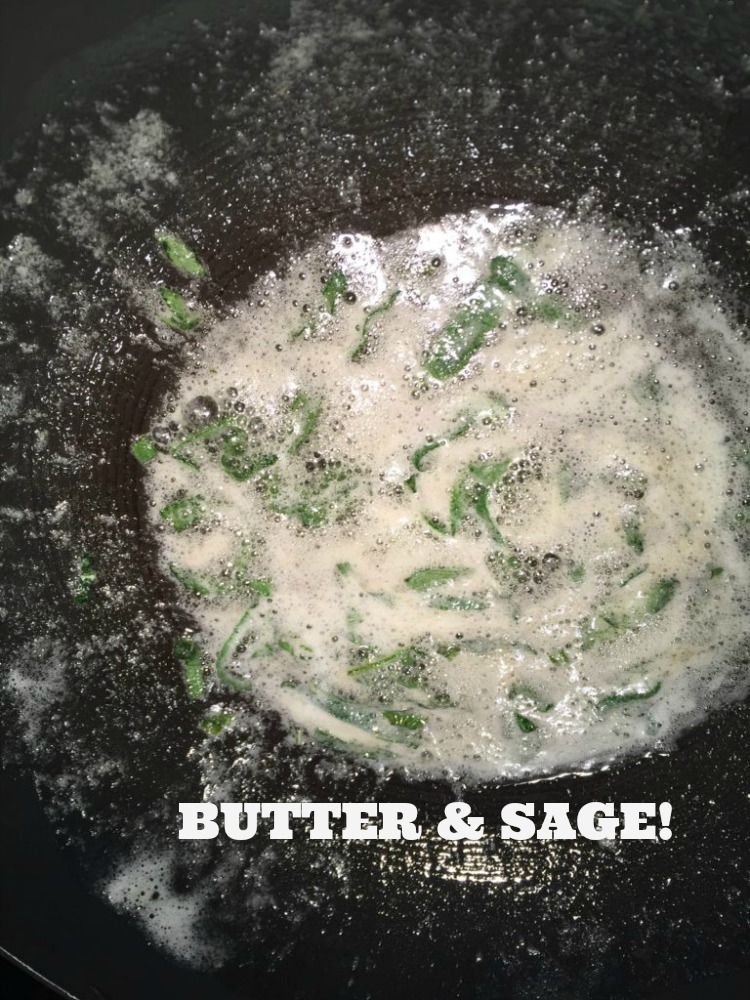 Our impromptu gnocchi making night was fun for the whole family and our visiting chef friend here from Italy. We sat outside and enjoyed the gorgeous evening. The kids were arguing just a little bit and my son was wondering why the gnocchi are such a weird color, but he enjoyed every last one! It’s taken me a while to get this recipe up here, excuse the delay as I attempt to catch up with a a couple of recipes I’ve wanted to share here! One of my pups had a massive surgery on her leg. It was pretty sad to see her not able to use one of her legs and the last two days before surgery she was usually hiding way, way under the darkest, safest corner of the couch. Surgery was last week and it went well and she has that ridiculous cone on her head, but she seems used to it by now. 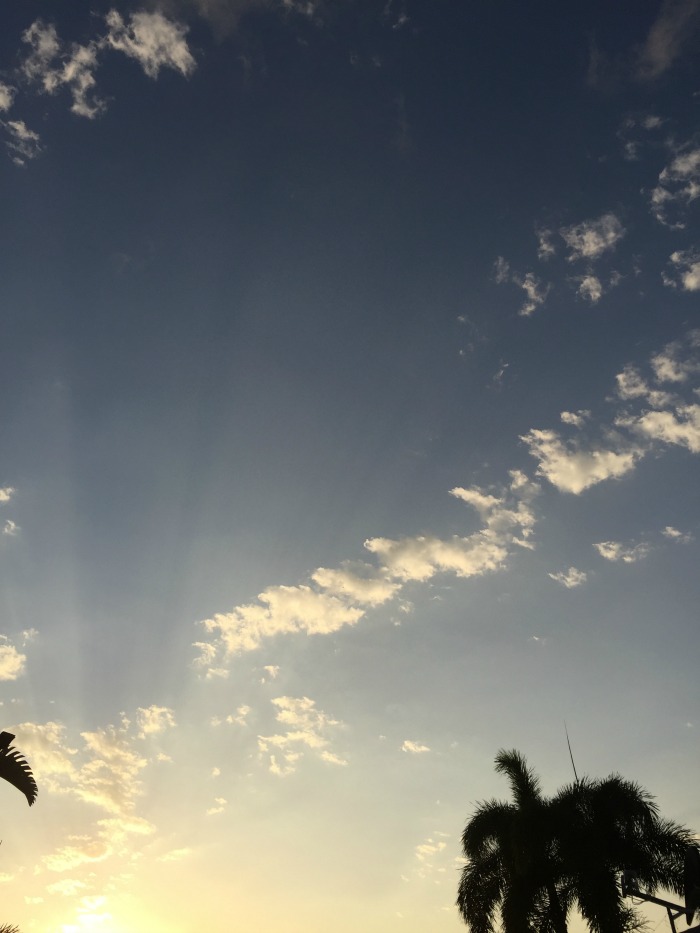 some notes on this recipe:

As I mentioned in the post above, it’s not easy to make gnocchi and to photograph them. You maybe will be making them just for the sheer pleasure of enjoying them, so the mess won’t be tricky to deal with. I pureed my beets in my food processor. If you have a potato ricer, that is ideal to get the potatoes totally smooth. You could need more flour as you are going along putting together the gnocchi dough.

1) mash the potatoes while they are hot.
2)cool the potatoes before adding to flour/eggs.
3) don’t forget to add flour to your working surface so it won’t stick while you are working it.
4) don’t over mix or it will become mushy.
5) cook in boiling/salted water.
6) don’t stir while cooking or they will stick.
7) they will float to top when they are ready 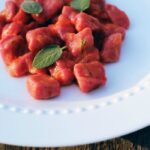