This traditional Irish Soda Bread-Spotted Dog requires no rising time and is so simple to put together. No kneading and no waiting…in no time you have an amazing quick bread! It is just perfect for breakfast or enjoy with a hot cup of tea whenever you need a little break. 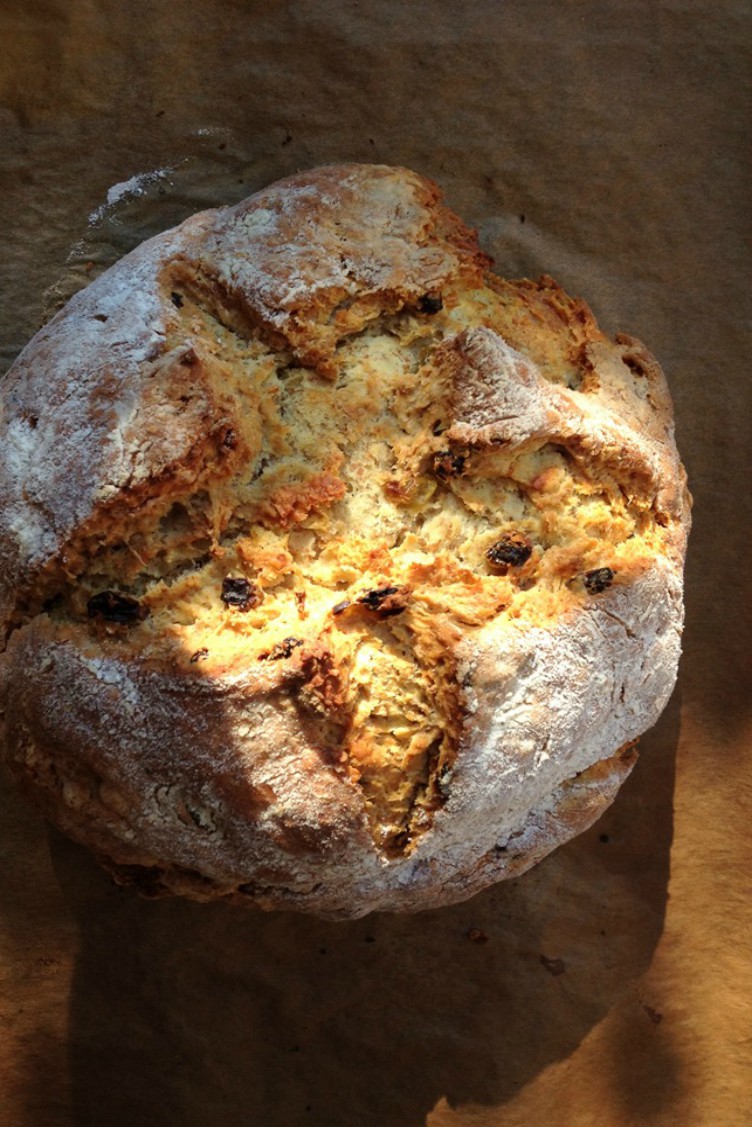 It’s not often that I make things for St. Patrick’s Day. It never crosses my mind to make green colored frosted cakes or green drinks. I do like to see the creations going around the web for this festive holiday.
Originally published March 17, 2013 and updated on March 7, 2020.
This is one of my favorite bread recipes and I thought it was a nice moment to share again here with all of you. I included  history of the Irish Soda Bread…feel free to jump to the recipe below if you are excited to get baking and skip that part!
I found several American Irish soda bread recipes I couldn’t wait to try. The most recent I came across this week in the New York Time’s. It was more like a dessert bread than a hearty and grainy bread I’d expect to find if I were lucky enough to end up one day in Ireland.
My mom is a thrifting expert. She sometimes comes across gems like old issues of Gourmet magazine. Oh, I sure miss that incredible magazine. She just picked up a Gourmet from 1994 last week. 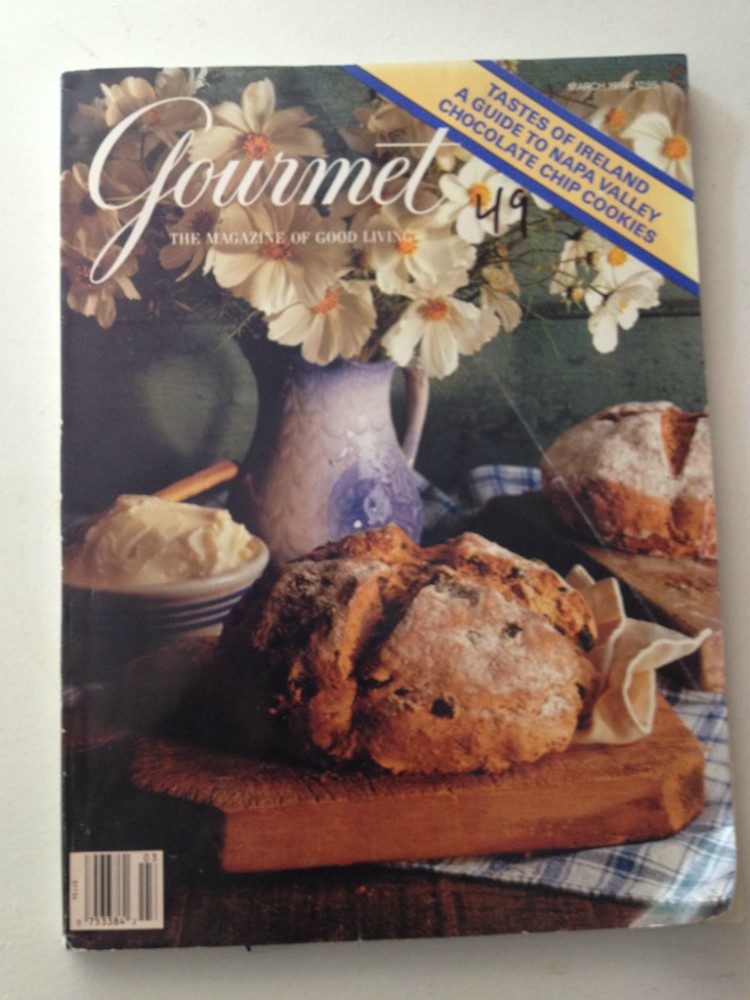 One of the articles in the magazine is by Jeanne Lemlin. Jeanne wrote about Irish soda breads after a trip she made there with her family. Jeanne writes, “In my quest to discover what accounts for the deep, abiding flavor of soda bread, I spoke to a number of people in towns along the country’s southwestern coast and, extending my search to the professional level, the bakers at Field’s supermarket (where my favorite bread is made).
She goes on to describe observing the Irish bakers: “As the six women worked, silently and swiftly measuring, mixing, kneading, and shaping, McSweeney (the bakery’s manager), explained, ‘You must use a coarsely ground low-gluten flour.’ “
Jeanne describes touching the dough, “I had always assumed that when you bake a free-standing, circular loaf, your dough has to e fairly stiff. And, although these bakers don’t knead the dough as assiduously as one would when preparing yeast bread, they do handle these masses quite vigorously.”
Jeanne shares four recipes from around Ireland. I feel confident in saying this is an authentic Irish soda bread. Of the four recipes in the article, Jeanne explains, “ ‘Brown bread’, the most common sort of soda bread,  is a dark loaf made with whole-meal flour; it was this version that I found most irresistible. I may share that recipe one day soon. 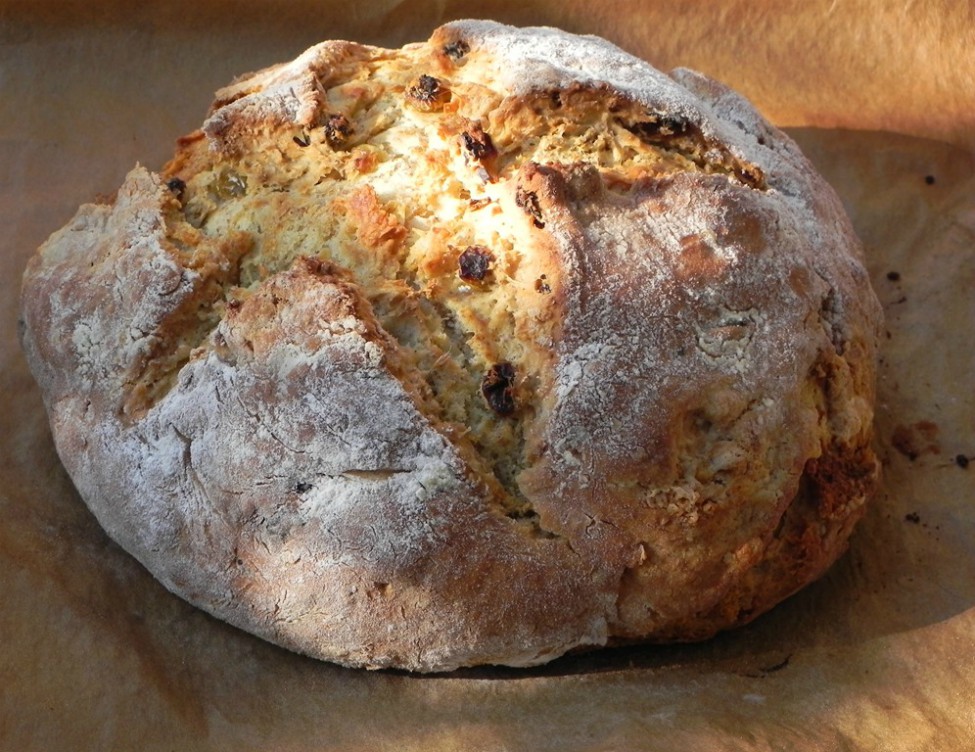 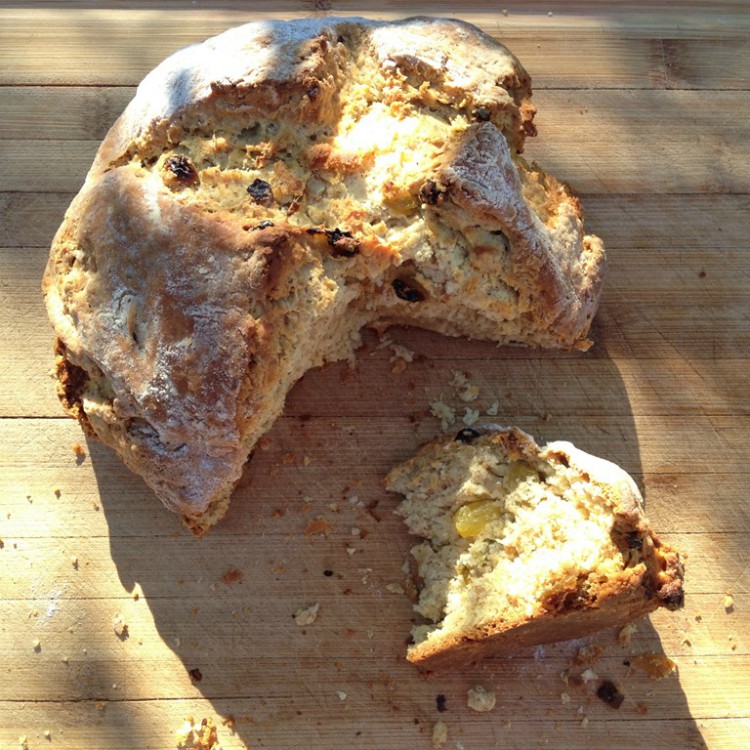 What are the origins of Irish Soda Bread?

I had to read a little about the origins of Irish Soda Bread. I found out there is even a Society for the Preservation of Irish Soda Bread. The author of the article explains, “the Irish have made Soda Bread theirs.  Not by choice, but by a state of poverty that made it the easiest bread to put on the table.”
It was very interesting to read that in the journal Chemistry and Chemical Analysis by the Ireland Commissioners of National Education published in 1861 in Dublin the following appeared on page 319:
Although it is very desirable that bread should be light, it is not always possible to obtain yeast: – hence, what is called “soda bread” has been of late, very much used.  Its lightness is due to carbonic acid, disengaged from bicarbonate of soda.  The latter is mixed with the flour, and is decomposed by an acid — sometimes, by that contained in sour milk, but more conveniently by dilute hydrochloric acid.  This kind of bread, has not the advantage of its constituents being even slightly broken up, by incipient fermentation; nevertheless, it is said to have properties, which render it at least as wholesome as that which is made with yeast.

What is not included in a traditional Irish Soda Bread?

And just about anything else one can think of.  All of the above ingredients can be found in “Irish soda bread” recipes somewhere on the web.  Interesting, but definitely not Traditional Irish Soda Bread.”

You can go over to their page called soda bread  to find out more!
Do you have stories about Irish Soda Bread? Share them in the comment section…I’d love to hear them! 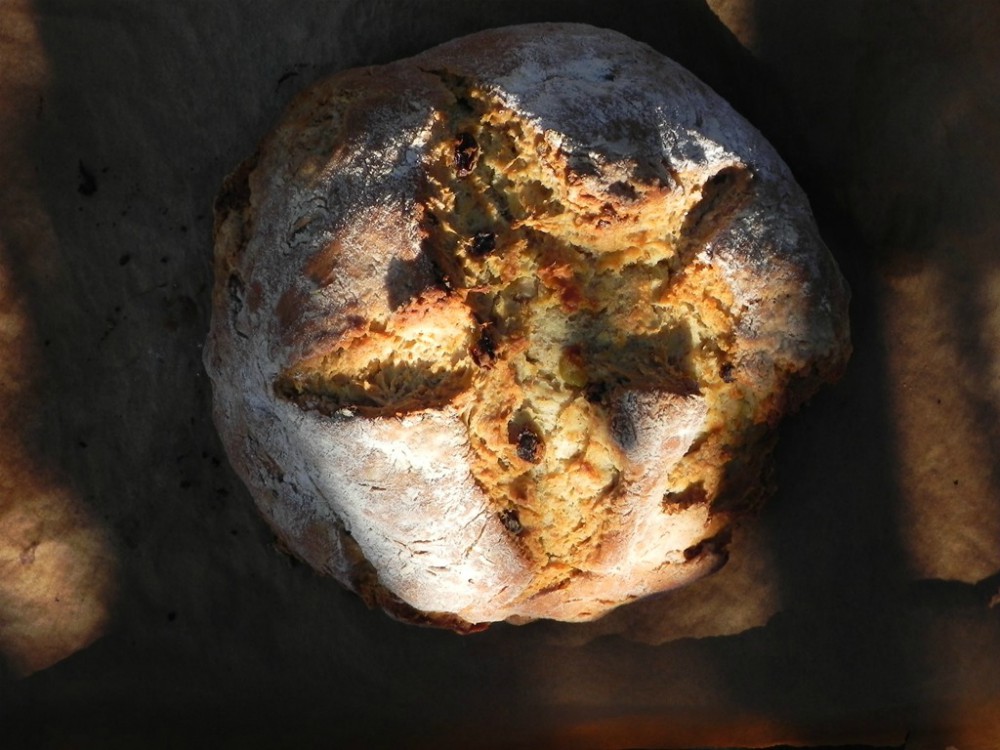 If you are a novice bread baker, you must try this recipe. It is put together in a flash. There is no worry about letting it rise and how to shape it. It’s a rustic bread with a wonderful crumb. I’ve baked it already a few times. Each time the slashes I made turned out to bake into a different pattern.
This last time it ended up looking almost like a starfish. Jeanne explains, “The golden raisins in the bread impart a tangy flavor. This recipe (which comes from County Cork)is at its best when allowed to sit for a few hours before slicing.”
I can tell you that I would’ve had to have baked this bread without any one at home to let it sit for a few hours before slicing. I had a crowd of family members around me waiting for the first slice. It was loud and chaotic. There was Kerrygold cheese and there was some butter and there were plenty of happy customers. Whatever happens to be leftover is wonderful heated up the next day to enjoy for breakfast with coffee.

Why is this Irish bread called a spotted dog?

The basic soda bread is made with flour, baking soda, salt, and soured milk (or buttermilk).  So the bread I’m sharing that is called Irish Soda Bread in Gourmet 1994 is actually a Spotted Dog because of the addition of raisins.
What’s needed for this quick bread? 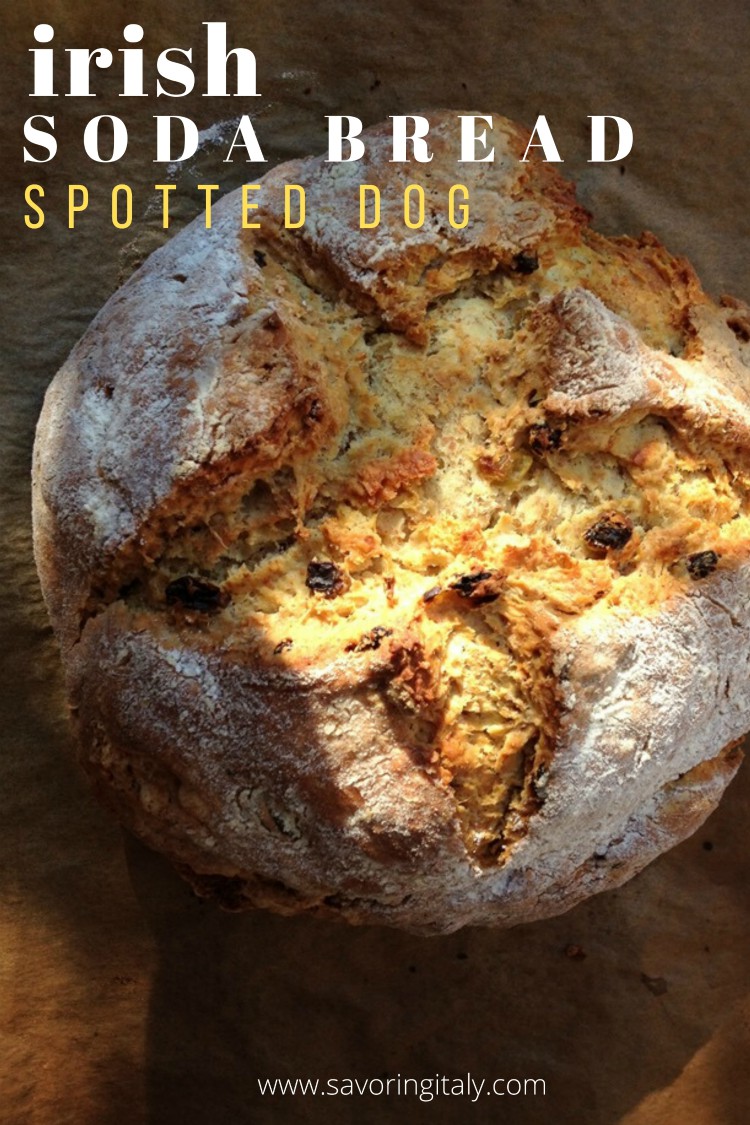 Pin it to your BREAD, BAKING,  or  COMFORT FOOD to SAVE for later!

Some other quick bread and delicious holiday bread recipes you might enjoy:

To all my friends that celebrate, I wish you a very Happy St. Patrick’s Day! 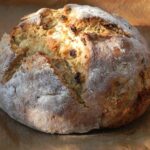 This traditional Irish Soda Bread requires no rising time and is so simple to put together. No kneading and no waiting…in no time you have an amazing quick bread! It is just perfect for breakfast or enjoy with a hot cup of tea whenever you need a little bread.
Prep Time10 mins
Cook Time35 mins
Course: Bread
Cuisine: Irish
Keyword: Bread, quick bread, raisins
Author: Lora

It looks wonderful Lora, and yes the slash looks like a starfish! I love making this bread, so I'll save your recipe to try it soon.

This is wicked gorgeous bread lady. I just want to snatch a piece off the edge.

Not only because Irish breads are among my favorites but this has got to be one of the prettiest I've seen. I love the pictures, too. Oh, to be able to reach into my screen to take a piece…

This looks tasty! and I love the vintage magazine. Those are always the best 🙂

Great post.
List of ingredients that shouldn't be present in a real Irish Soda bread is more than useful. That makes your post amazing.
Then, Gourmet issue is a real treasure. I miss a lot Gourmet.
Now it's my time to recover. This year for the first time I realize it was St. Patrick’s Day the next day. This recipe is a right way to live St. Patrick’s Day any day I'll have time.

Oh my gosh. It came out beautifully! I've never tried an American version although the version I tried used an egg so I guess it's by definition not Irish. But you know, a sweetened one! Sugar just makes everything tastier. 😉

You did a great job with this loaf! So very pretty.

I usually make Irish soda bread just around St Patrick's day and then I forget about it till next year.
Thanks for doing all the research and sharing with us

Gorgeous soda bread Lora!!! I love baking this type of bread-so easy, delicious and rewarding 😉 Please pass the butter and jam;-)
I think a little sugar in this bread is just perfect for my taste!

I am a novice baker, so this bread might just be a perfect beginner's recipe for me! Seems simple, but the result is a hearty bread!

And yes, I miss Gourmet magazine as well. That copy is going to be a classic, if not already.

This bread looks fabulous. I'm imagining it along side a nice salad or bowl of soup. YUM!

It's delicious with rich Irish butter. 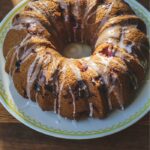 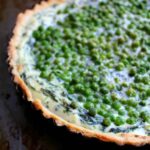 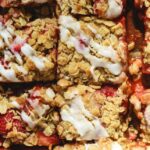