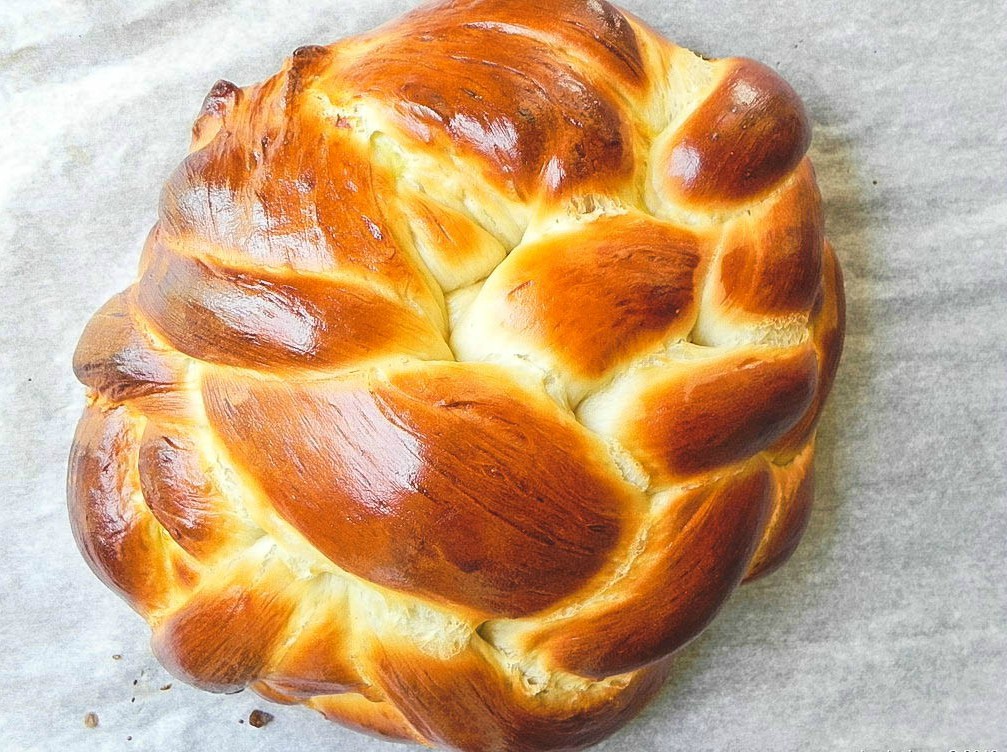 I couldn’t wait to get baking this month’s bread: Honey Challah. The conversation of challah came up when we first launched Breaking Bread Society in May.

Whether you bake along with us every month or just once, we want to inspire you to love baking your own bread one loaf at a time. We encourage you to make the recipe your own.   Be creative with your challah and put your own spin on it.  Twelve breads. It’s just a different bread a month. 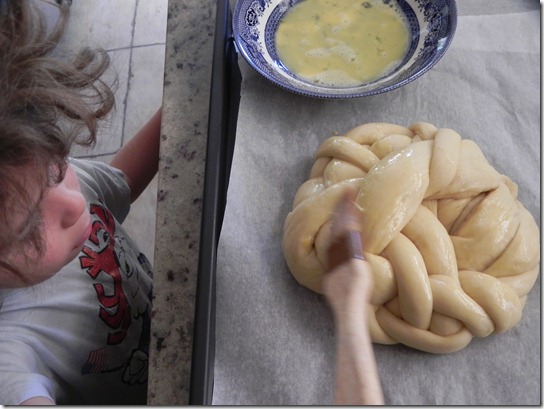 This honey challah recipe was not difficult to make and it was fun experimenting with the braiding. The kids got involved in attempting the 6 strand braid. We watched a few videos and braided and laughed. We laughed because it we weren’t successful with the 6 strand braid. We couldn’t give up and ended up turning the 6 strand braid into a round challah. I was worried I thought it would not be the prettiest. In the end, it was the most beautiful bread of all we baked together. The crumb was soft and buttery. I couldn’t wait to eat it for breakfast the next day. The raisin challah loaf made excellent French toast the next day.


In a mixer, with a dough hook attachment, add the warm water and yeast. Mix until blended.  Add the sugar and mix about a minute. Slowly mix in 1 cup of the flour until combined. Mix in the eggs one at a time until they are combined.  Add another 2 cups of the flour, the honey, oil, and salt.  Mix together on medium-low speed stopping the machine to scrape down the sides of the bowl.  Slowly add the rest of the flour (the remaining 4 cups) and mix until combined. Stop the machine as you add each cup of the flour to scrape the sides of the bowl and incorporate the flour. Mix on low speed for 12 minutes until dough is incorporated. Be sure to give your mixer a break and as you don’t want to burn it out. Add flour if needed 1 tablespoon at a time. The dough will be a little sticky but also firm. 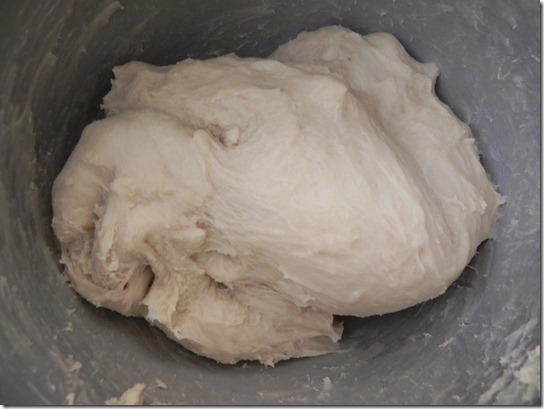 Take dough out of mixer bowl, form into a ball and coat with a light film of canola oil. 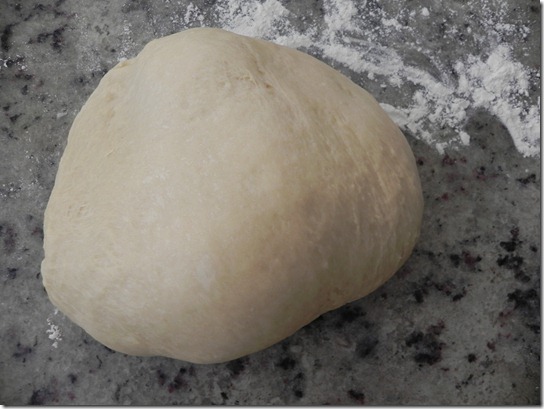 Form the dough into a ball and place into an oiled bowl (when I put the dough in the bowl I swish the dough around the bottom of the bowl and then flip it over so all of the dough is covered in a light film of oil). Cover with plastic wrap and let it rise at room temperature until doubled in size (about 1-1 1/2 hours).

Take dough out and cut into six equal parts, three parts for each challah. I didn’t flour surface but if you find it necessary, flour just slightly. You are now working with only three parts, the other three put back into mixer bowl and make sure they are covered with plastic wrap. For the first challah without the raisins, punch the air out of each of the three parts of the dough and roll out into a 20 or so inches long cylinder each.

Pinch three cylinders at one edge and braid challah. Pinch the other side once you are done braiding and tuck pinched sides underneath challah at each edge. Roll braided challah gently like a snail into a round challah shape. Tuck the outside edge under the round challah gently. 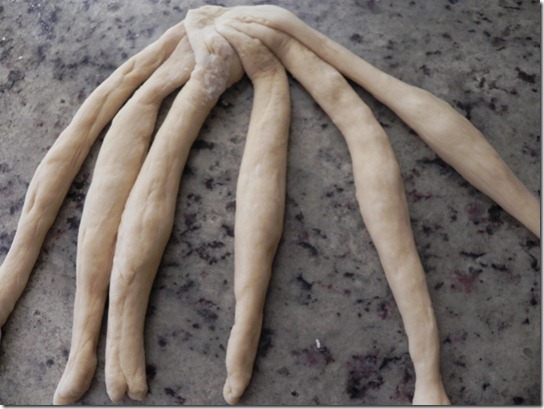 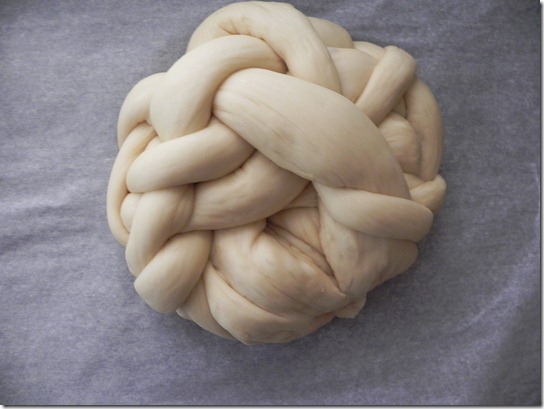 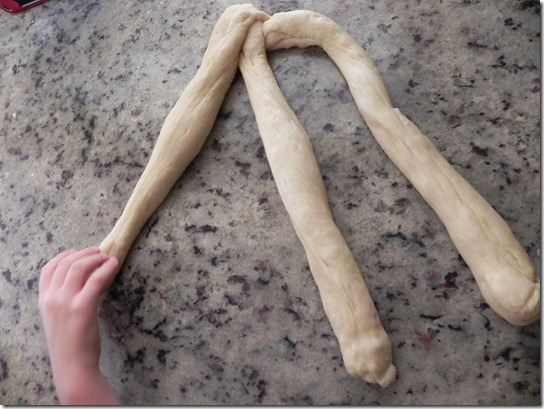 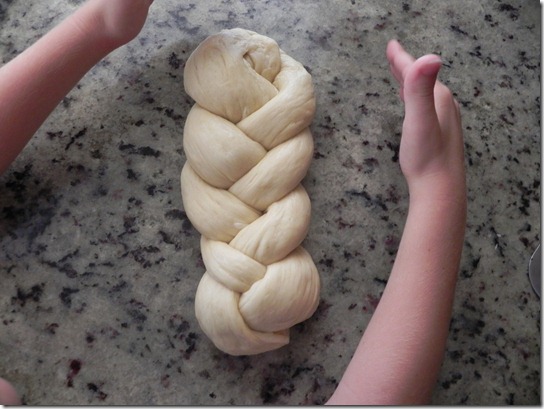 Transfer to a parchment lined cookie sheet, cover with plastic wrap and let double, in a cool place, about an hour or less.
The 3 strand braid ready to be brushed with egg wash. 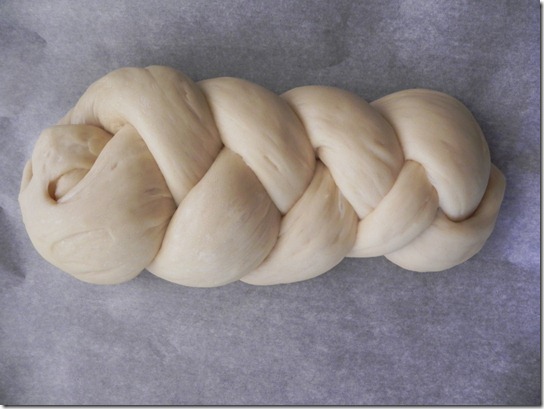 Pre-heat an over to 350F. Beat the egg with the sugar (and also a teaspoon of water) and brush risen challah with the egg wash. Brush even on the inside of the braid and all along the sides.
Luca made sure the round challah had a great egg wash. He brushed and brushed. He gave it about 6 coatings I think. 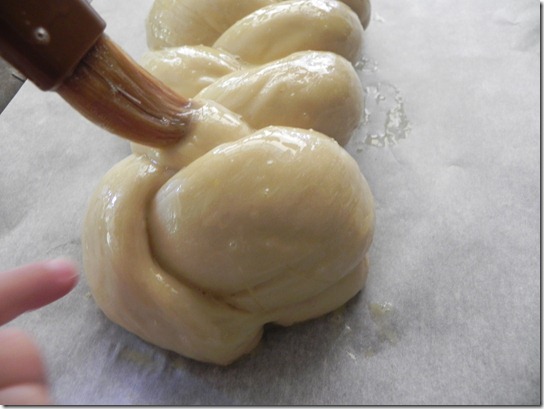 For the sesame challah,  sprinkle with sesame seeds before baking. Bake for 35 minutes or until golden. In my oven it took about 33 minutes. Ovens may vary so check your challah at about 30 minutes and see how it’s doing. You test if it’s done by tapping the bottom of the loaf. If it sounds hollow, it needs a bit more time.* Be careful to not burn your fingers like I did when you do that test.

Punch air out and roll into three cylinders the remaining dough then flatten rolled cylinders, sprinkle golden raisins along the surface and roll again into cylinders. From this point on continue following directions as written for regular honey challah.

Happy bread baking! Thanks for joining us this month with your challahs.:)