I really enjoy baking vegan recipes. I have a family member that is dairy free, so there are often dairy free or totally vegan recipes happening in my cucina. This Vegan Maple Apple-Cranberry Crumble is the perfect fall dessert.

It’s loved even by those that aren’t following a vegan lifestyle. The crumble is made with a vegan margarine (I like Earth Balance) and is totally delicious with the soft and sweet apples and tart cranberries.

I made this yesterday afternoon for Thanksgiving. Our vegan friends from Portugal were joining us for our very Italian Thanksgiving (there were almost 20 of us again!!). I’ll try to come back and share some photos.

IS AN APPLE CRISP AND APPLE CRUMBLE THE SAME THING?

A crisp topping is made with a combination of flour, sugar and butter.

A crumble is a baked dish of fresh fruit (berries, apples, plums, etc.) that is topped with an oat-based streusel. A crisp is just like a crumble-but some say crisps never have oats, and some say they do! I made my crisp without oats. Feel free to add oats to your topping.

WHAT KIND OF APPLES ARE GOOD FOR AN APPLE CRISP?

You can use just about any kind of an apple for baking an apple crisp. Crisp and tart apple varieties work better than the sweeter varieties.

You could try Granny Smith,  Empire or Honey Crisp. You could even mix together all three apple varieties.

HOW MANY APPLES ARE IN AN APPLE CRISP?

There are 6 cups of apples, peeled, cored and thinly sliced (which is about 6-8 apples-use a combination of sweet and tart baking apples).

The part of this post is original text from 11/11. My dear dad passed away a little more than a year after I wrote this. I miss him very much. He was such a part of my baking and cooking. Even though he was very sick and could barely eat, he loved to sample my baked goodies and other dishes. He always gave me tips and really great compliments. This was maybe one of the last things I baked for him and wrote about.

In the last few weeks, my dad has been dropping some not too subtle apple pie hints. Hints like, “I miss your apple pie.” He’s recently also exclaimed, “Look at these gorgeous apples you found at the fruit market! Perfect for an apple pie.”

The other day he reminded me it’s been months since I made him an apple crisp. I can’t say no to my sweet pops. He wanted me to give him a baking lesson. He helped me cut the apples and make the crumble. He says he will give this recipe a try one day. He left with his portion and was totally thrilled. I get him to visit us a little more often if there’s the promise of freshly baked apple dessert.

I made a mini one for my dad. He requested for his to be made without any cranberries. 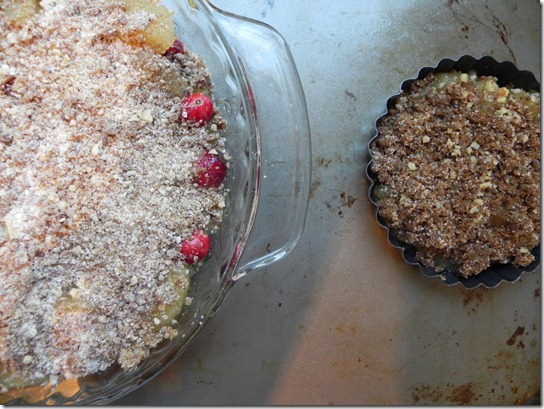