The holidays have came to a crashing end and I’m still dreaming of dishes we made, like this roast pork loin (arrosto di maiale). It was planned that we would make this on New Year’s Day by my mother-in-law.

We have had so much fun making big holiday meals since my in-laws have been here for over a month visiting from Italy. New Year’s Eve we had cotechino and lentils. The lentils bring good luck and the cotechino is a typical sausage they make in Italy for the holidays. It’s actually found in any supermarket ready to go, but ours was homemade and even more delicious. I really missed my dad’s ham this Christmas season. We never ended up making one and I know he also loved to make a turkey and roast pork loin, or coscia ‘i maiali arrustutu (that’s how you would call it in Sicilian).
This roast was how we chose to ring in 2017 the next day. I guess while everyone is starting their detox and lighter meals, we didn’t do too badly. The pork is very lean, but the mashed potatoes had a little bit of butter and can’t be considered too light. But I think when you are eating a comforting roast like this with gravy, it has to be paired with luscious mashed potatoes.  The aroma of the roast and all the herbs slowly cooking away is comfort food at its best!

It was lots of fun discussing with my mother-in-law Teresa how to make the roast. Teresa was explaining it had to be seared first to get some color and we could do it on top of the stove. I was looking for something a little more less fuss. After a late night the night before, I was looking forward to letting the roast do most of the work on its own while we relaxed. I figured that seasoning our roast and setting it in the oven would be easy and perfect for our big family meal. She finally was convinced that there was no need to sear it on top of the stove and told me I should put the oven on 500 F. I translated that into celsius for her to let her know that would be way too hot to start it off at. She wasn’t convinced that 25-35 minutes would be enough to give it the nice color she gets when she cooks her roast, but I had to prove to her that roasting it at the very high temperature would be a little too long.Not easy to convince her, but I did it. I wanted to add the wine a little earlier and baste it a little, but she explained you have to wait until you lower the temperature and then add the wine. My mom was on the phone with me explaining to tell her the pork would get too dry and we better start to add some wine and baste it. Teresa wasn’t impressed with how my mom made some pork ribs the other evening, so she had no desire to take some tips from her. Lots of cooks competing to make the roast the right way, and I think there are different methods that will all lead to an easy and warmly satisfying family meal. 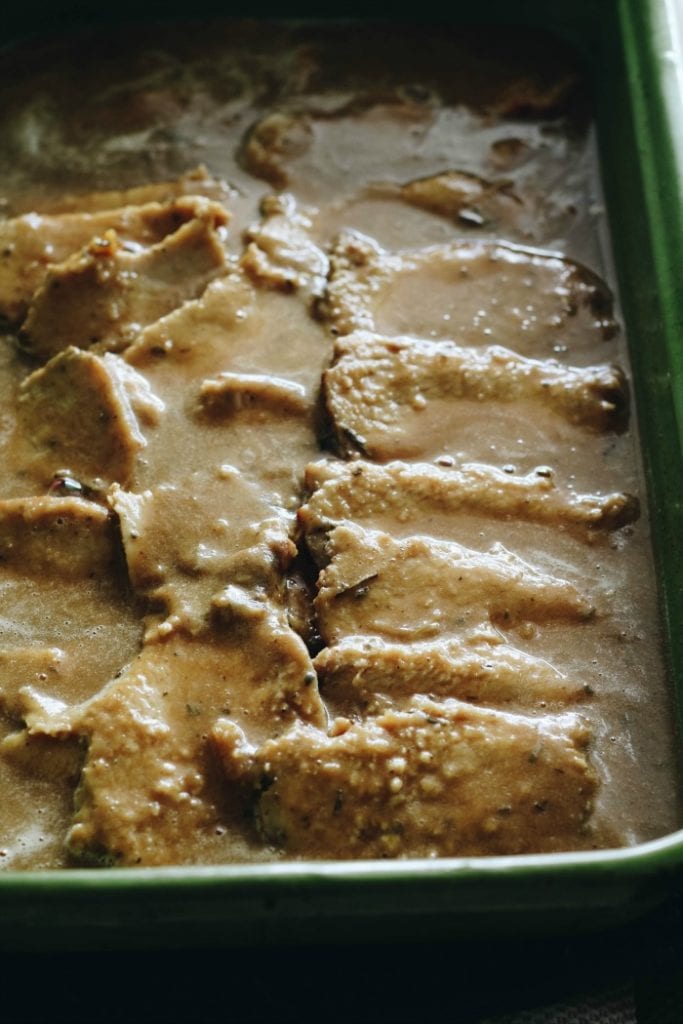 I always heard that searing seals in the juices of the pork and makes it more juicy. In Cook’s Illustrated, The Science of Good Cooking: Master 50 Simple Concepts to Enjoy a Lifetime of Success in the Kitchen by the editors of America’s Test Kitchen and Guy Crosby (America’s Test Kitchen), they explain during testing they found that the searing does develop flavor but does not seal in juices. They explain, “Searing meat adds flavorful crust, but it has nothing to do with the juiciness.” 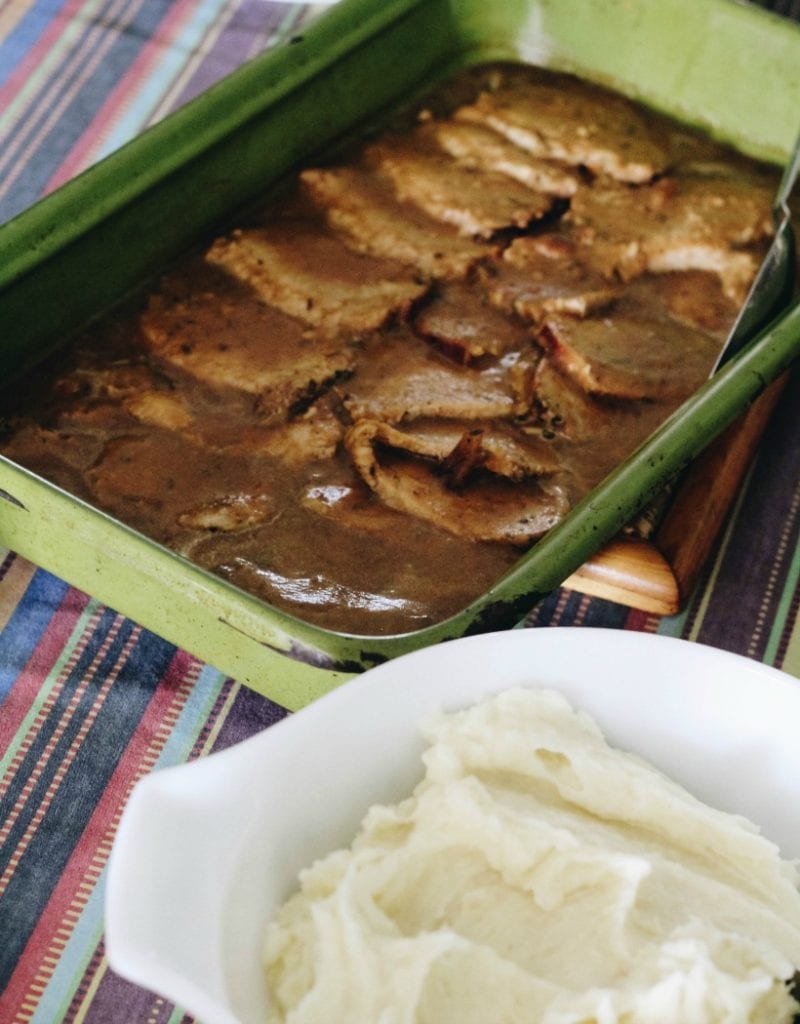 some recipe notes:
There are different cuts to use for making a roast, but we used the sirloin roast that is cut from the back of the loin area.  The boneless pork is very lean and has a more subtle flavor, but is very tasty from the outer layer of fat. When choosing your roast, try to find one with a nice amount of fat on the outer layerThe following recipe uses boneless sirloin pork roast.  You may even be able to find a butcher that leaves the skin on the roast. If you do find a roast with the skin, leave it on as it will turn into lovely crisp cracklings as it’s roasting! The roast we found was already tied with string which keeps the roast all together while cooking. You can easily tie yours with kitchen string every couple of inches (in case yours comes untied).  The pork roasted uncovered the entire time.As for the herbs, how lucky as I to have dried herbs that Teresa brought for us from Italy from their garden. I normally wouldn’t use dry herbs, but the flavor of your own freshly dried herbs surpasses any store bought version. When you make the sauce, be sure to check the flavor and add more salt as needed. I used about 4 teaspoons of salt for the roast. Typically you should use about 1 teaspoon per pound of meat.  As I mentioned, we made creamy mashed potatoes with our roast. We also had spinach and a bean salad my mom made to bring in more good luck for the new year. 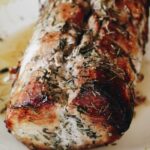 Your roast developed a beautiful color and I'm sure was delicious. All the best in this coming year.

That is one fabulous looking pork loin roast! Can't wait to try it 🙂

I just love a good roasted pork loin roast! 🙂 This one looks amazing.

I loved reading about the back-and-forth between you, your mum and your mother-in-law to come up with the perfect method for cooking this roast. It looks as though you succeeded!

Wow, this roast has perfectly coloring. I can't believe it wasn't seared. I'm definitely going to try this out.

This has to be one of the best looking pork recipes ever!

This roast sounds so delicious! Now I'm dreaming of going back to Italy so I can all of the food.

I make often arrosto di maiale. It is our prefered.

You obviously waded through all the advice splendidly! Your roast pork looks divine!

That looks heavenly! And I would want to pour heaping spoonfuls of that gravy onto my plate and lick up every last drop!

just discover this site from somewhere. great sharing story & experiences. i will recommend this site to my friends out there.

Your recipes and photos are always so wonderful! This pork loin looks perfect! The holidays may be over but dishes like this pork loin are still going to be happening in my house!

This has me just drooling over here!! Wow!

Yum, I love all that rosemary! My family would go crazy for this!

Do you cover the roast during roasting?

Hi Shauna, no, it was not covered. I'll add that to the recipe notes. 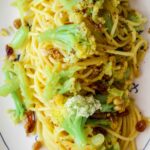 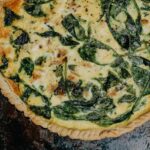 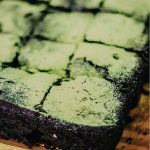