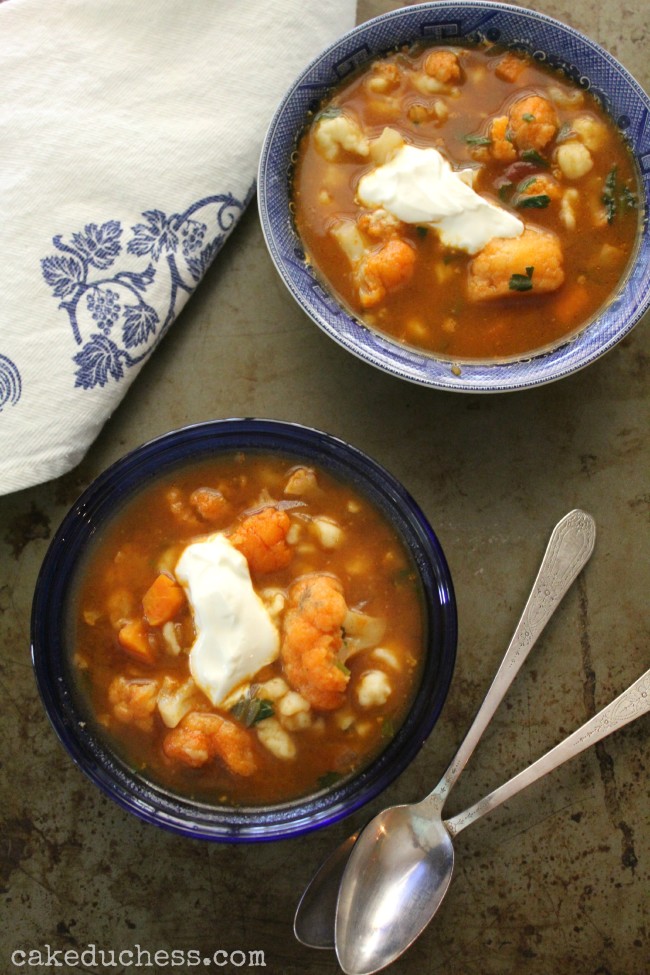 Brrr! It’s cold. You know it’s cold here when it’s colder than my in-laws house in Italy. But it’s not nearly as cold as where I have family in Ohio (-10!) -or where my friends are in Atlanta and NYC. So for this cold day we have a family favorite soup!! Paprika Cauliflower Soup (karfiol leves). This is the one soup that I could make any day and my son would be thrilled!
Actually I’ve been making a lot of soups recently. Even if we had the hottest December on record for years, soups were still in order!This is a soup that my Hungarian mom makes often and so does her sister Aniko. But if you ask Aniko how to make the soup and ask my mom how to make the soup, you will get 2 slightly different versions. They are both delicious soups because I’ve had both of their soups. Truly delicious!
I called Aniko recently to get some tips on making the soup and didn’t realize it was so different than the way my mom makes it. She prefers to have the cauliflower very soft. My mom claims they are overcooked and ‘too mushy’ the way her sister makes it. My aunt claims my mom’s cauliflower is ‘too raw’ and ‘very crunch’…not the REAL way to make this Hungarian soup (keep in mind that this is all told to me with a very, very heavy Hungarian accent).
There is one thing both my kids totally adore and that’s my mom’s spaetzle…they are so good! She makes them with her chicken paprikas and other Hungarian dishes. I really love it in her soups. I impressed my mom with my cauliflower soup but I did beg her to make her spaetzle…and trust me, she was happy I did! Because I according to her, there is no way I could make them like her! And let me tell you, you do not want to get into an argument with a Hungarian chef;)

So on a future post, I will share her recipe and photos. For now I am sharing the Saveur recipe, which she said is fine! 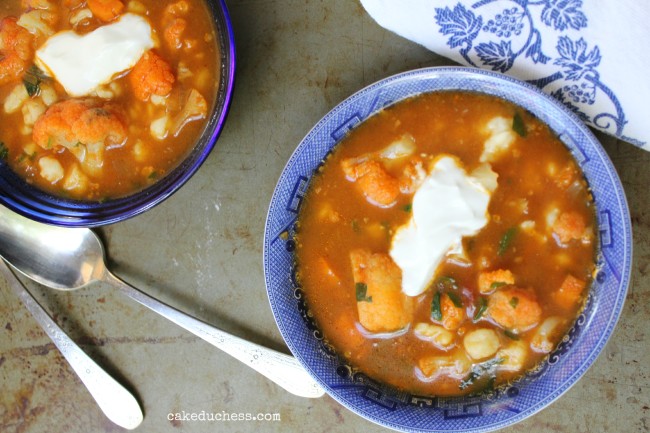 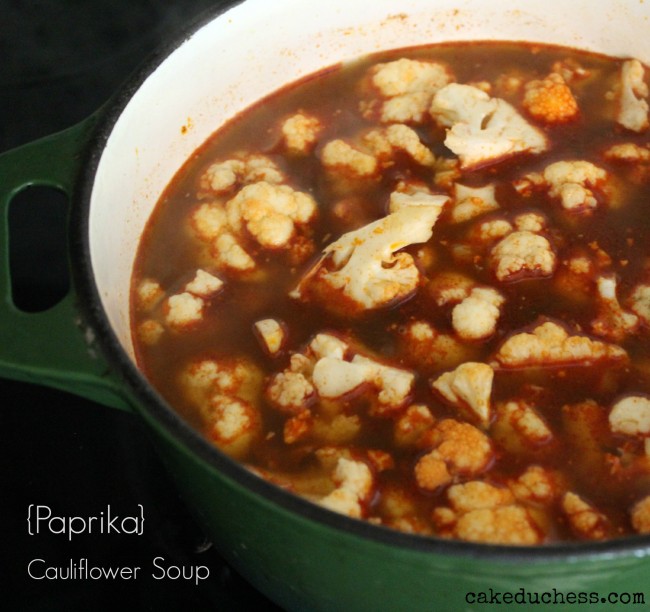 For my friends that are in subzero temps…stay warm and keep safe! For my friends that are craving a great bowl of soup, you have to make this! It’s vegetarian…it could even be vegan if you omit the sour cream you add on at end (or use vegan sour cream)and use margarine instead of butter. It is a really simple soup to make. If you don’t want to be daring and attempt the dumplings, use your favorite noodles instead-still will be fabulous!

Happy first week of January! Thanks for stopping by!

Paprika Cauliflower Soup – Karfiol Leves
by Savoring Italy
Prep Time: 15 minutes
Cook Time: approx 25 minutes
Ingredients (4 servings)
Instructions
Make the dumplings: In a bowl, stir together flour and salt; add 2 tbsp. butter, and using your fingers, rub into flour until pea-size crumbles form. Add egg, and stir until dough forms; refrigerate until ready to use.
Heat remaining butter in a 6-qt. saucepan over medium-high heat; add paprika and onion, and cook, stirring, until soft, about 5 minutes.
Add vegetable stock, cauliflower, carrot and celery; season with salt and pepper, and bring to a boil.
Reduce heat to medium, and cook, stirring occasionally, until vegetables are tender, about 15 minutes.
Using a ½-tsp. measuring spoon, portion out and drop all dumpling dough into simmering soup; cook, stirring occasionally, until dumplings are cooked through, about 3 minutes.
Ladle soup and dumplings into 4 serving bowls; garnish with sour cream and parsley.
2shares

Just learned that with the wind chill factored in it was -30 to -35°F today! Yikes! And today was WARMER than yesterday! We had no idea because we have not ventured far from our beds for several days; our little house was not built for double digit negative temperatures, thus bed is the
warmest location, not to mention haven. I hope you will include both the "mushy" and "raw" versions of the soup, so I can try both! Thanks for hitting the spot today.

Whenever it's cold I crave soup. This looks delicious!

I would love a bowl of this hearty soup. A cauliflower recipe that I will definitely make.

I've definitely been craving soups lately with all the chilly weather – this sounds so comforting – stay warm Lora!

Made this for dinner last night. It was excellent…very comforting on a cold night. Just one question. The recipe calls for parsley in the ingredients list, but I didn't see where to use it in the instructions. Is it a garnish?

Yes, garnish with the parsley. It is wonderful! Happy you liked it:)

This sounds like a really different soup — my family loves cauliflower, so I want to give it a go! And hey – we've got an unusual chill in the air in South Florida, so no better time than the present!

What a beautiful soup! It's going to get down into the teens this week and your soup looks like just the thing to keep me warm.

[…] broth, you could make different soups, sauces and risottos (just to name a few things!).  This paprika cauliflower soup is another soup we just love! Find more comfort inspiration in this delightful lentil […]

[…] They were on the thicker side and they were just LOVELY! Really, so good! I made Hungarian paprika cauliflower soup-Karfiol Leves , because as I mentioned, it was raining buckets! And because I honestly had no clue what to make […] 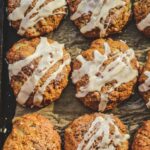 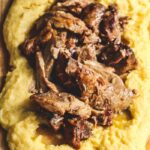 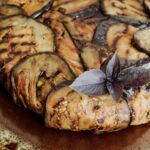