Bundt Panettone is a less fussy version of an Italian holiday panettone made in a Bundt pan. Delicious with a hot cup of coffee on Christmas morning.

Eating panettone is something I remember since I was a little girl celebrating Christmas in Sicily and here in Florida. Christmas just wouldn’t seem the same without a slice of fluffy panettone. I know not every child loves the candied fruits in it. I was one that did and looked for slices with extra pieces of the citrus bites. This panettone Bundt recipe is so easy to make and loved by all! 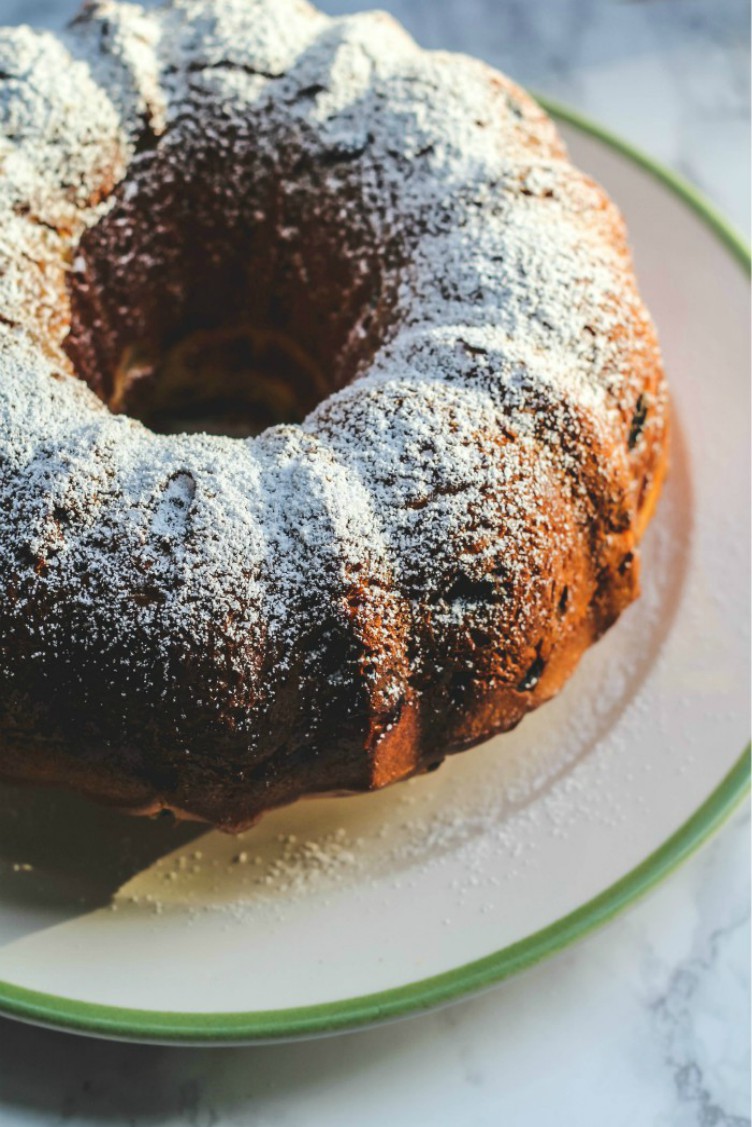 I love baking Christmas breads and especially breads from different countries. I have been trying some new recipes these weeks and will share some in the next couple weeks. The traditional way to make panettone requires lots of time (over 40 hours) and oodles of patience, with great rewards. 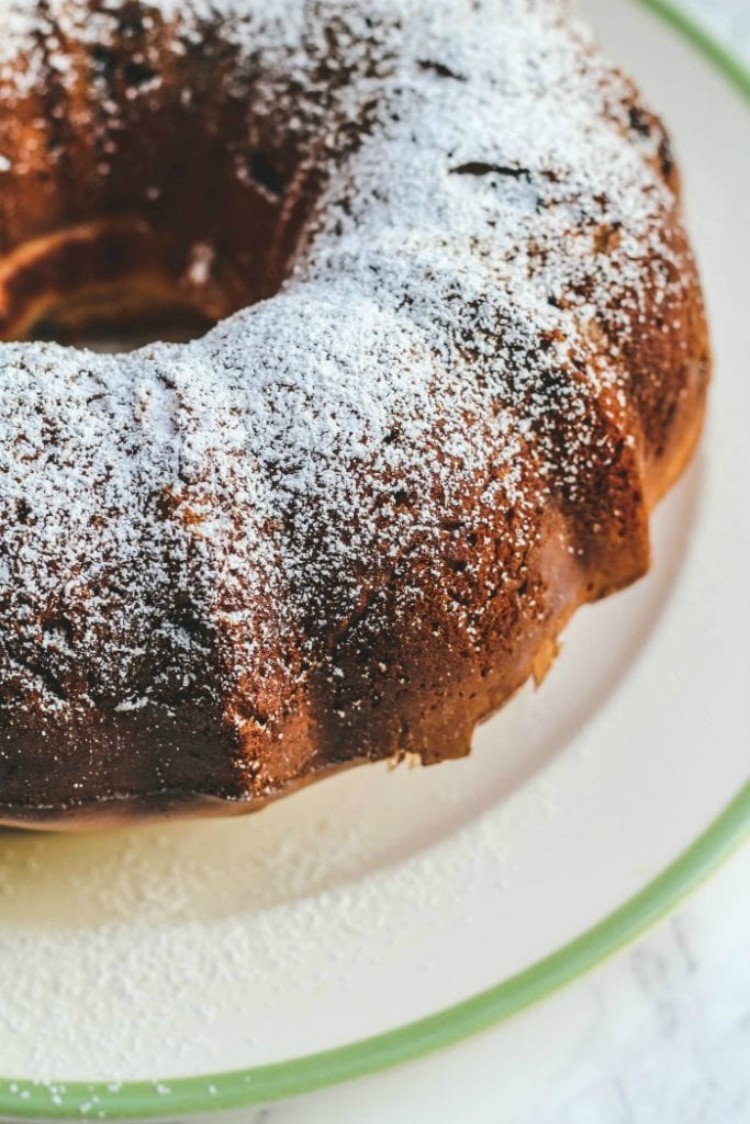 What is the history of Italian panettone?

I found on Gourmet Traveller:
There are almost as many legends attached to the history of panettone as there are versions of the bread. But a common thread is its place and time of origin – Milan, dating back, in one form or another, to the Roman Empire, when ancient Romans sweetened leavened bread with honey. Even the origins of panettone’s name are somewhat mysterious.

Some historians claim it derives from the Italian “panetto”, meaning small bread loaf. Conversely, panettone literally means large bread. Or it may have come about at the time of its first recorded association with Christmas, which occurred in the writings of an 18th-century illuminist who referred to it as pane di tono, meaning luxury bread. But it wasn’t until the early 20th century that panettone became widely adopted by Italians as their Christmas bread. This was due to large-scale production by two rival bakers, Angelo Motta and Gioacchino Alemagna. The two family companies were bought out by Nestlé in the late 1990s, and they have since been taken over by the Italian bakery company Bauli.

Bauli makes more than one thousand products, and is Italy’s leading maker of holiday cakes-panettone, pandoro, and colomba. Ah, colomba! My mother-in-law saves us colomba from Bauli that she buys during Easter time for us to have in June when we visit her. The Bauli factory uses its own lievito madre-fermented dough, in all of its breads. They attribute this mother dough to the secret to Bauli panettone’s long shelf-life and smooth texture. 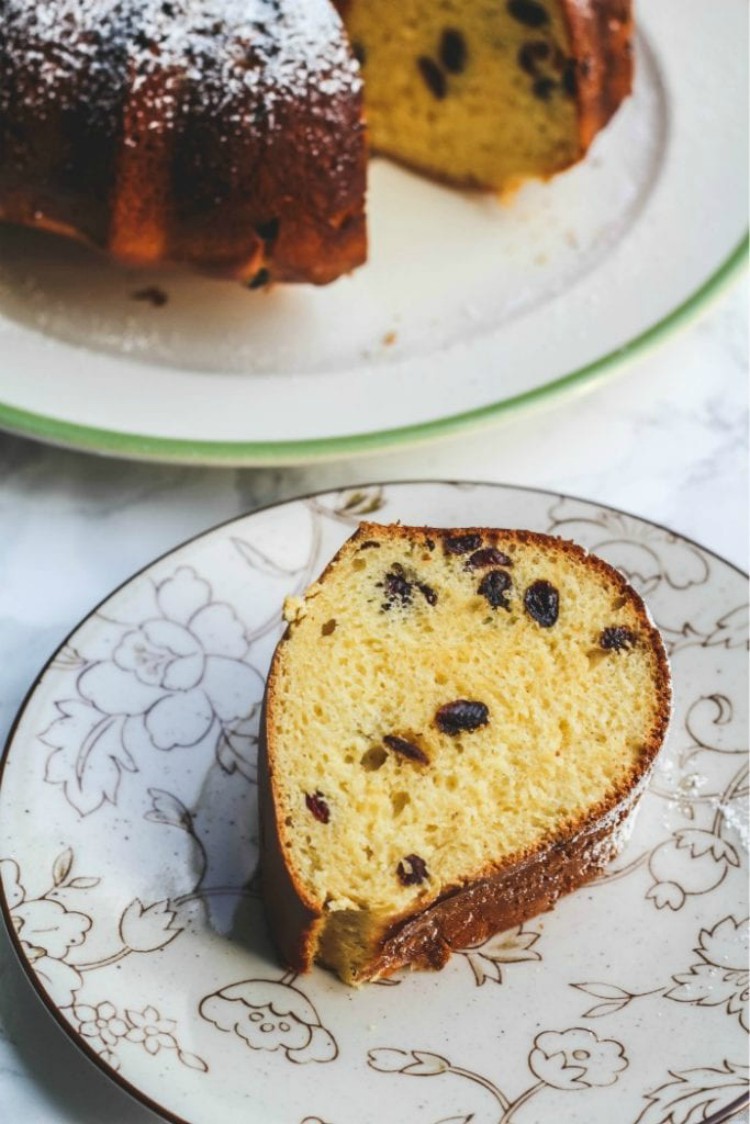 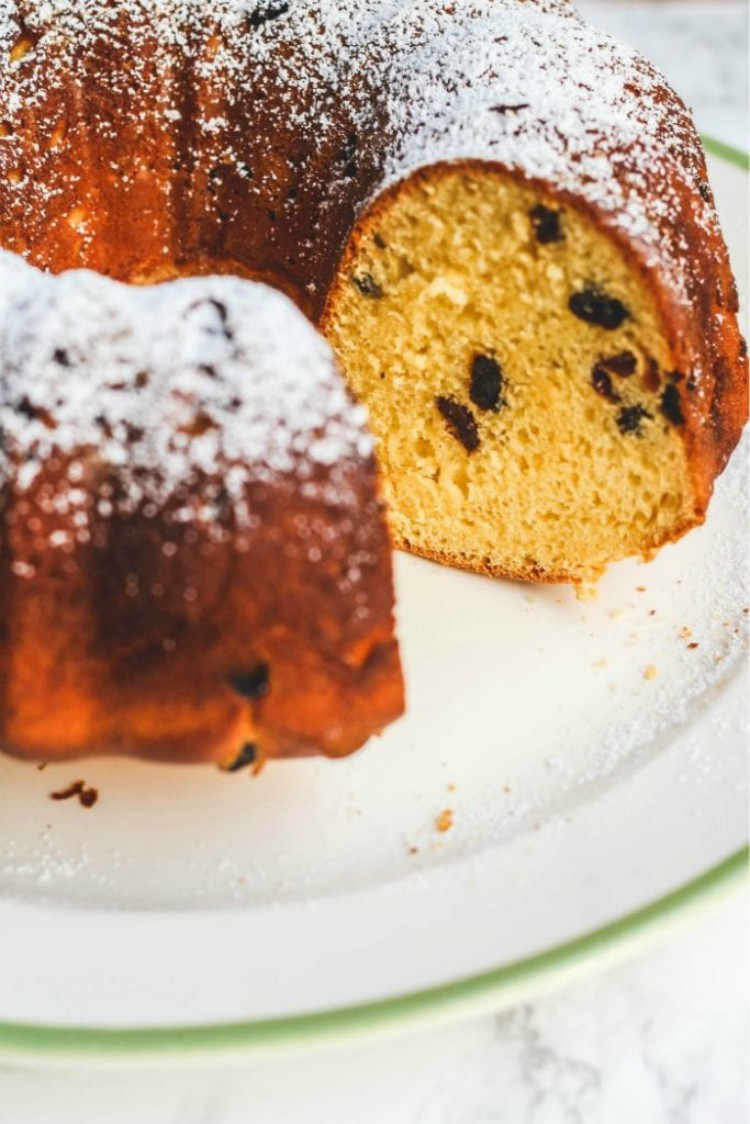 This is the dough (on the left)before rising. Look how much it rises after just an hour! You can add whatever dried fruit you like to this holiday bread. I added more raisins than probably most people like. I just love holiday breads with juicy and sweet raisins. You could even add dried apricots cupt up into small pieces. 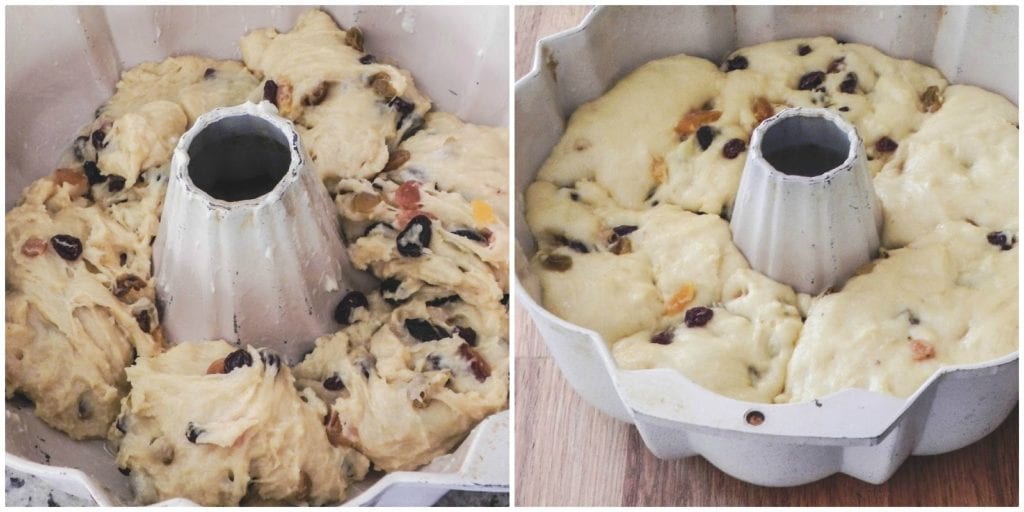 Some other yeast dough recipes to try: 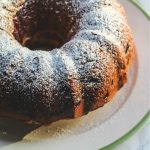 How fascinating a bundt cake that tastes like panettone. I have to try that! 🙂

Your Panettone is so beautiful–looks so much better than an store bought Panettone! Congrats on the feature too!!!

Congrats Lora!!! So happy for you!! You deserve it! There's a reason why you are the Cake Duchess! 🙂

Congrats on the feature – well deserved! My mouth is watering with this bundt cake you made!! 🙂

Congratulations on the newspaper feature!!
This cake deserves to be on the cover of something too…it's just perfect!

Believe it or not I never baked panettone before but maybe next year?! I don't blame your mom, she must be so proud of you and your accomplishment and many congratulations on the fine spread in the paper, Lora. So well deserved. I also love the theme of Christmas breakfast! 🙂

I adore panettone and yours is just gorgeous Lora!

Very cool! I've steered away from Panettone just because of the involvement of the recipe but this sounds wonderful, I will be trying it for sure! Especially with your chef-husband's approval, it sounds like a winner!

How awesome Lora and you should be proud to be in the paper too! My mom would have said the same thing too! You are such a great baker I wish I knew where you put all these lovely things you bake.

thank you so much for stopping by and happy to discover your blog. congrats for the success and I really find this "quick" panettone interesting, especially for the shape. at first glance it looks to me like a ciambellone, a simple baking powder based sponge cake. and instead, wow, it is made out of yeast!!! I believe you that it must have tasted close to panettone with all the filling. truly something to try. happy new year!

Please tell me is Panettone a cake or a bread? I have seen these in stores but often wondered what they are. Im not one to buy something Ive never tadted before for fear of not liking it and having wasted my money! I love raisons and love raison bread. Also love love love hot cross buns at Easter. Is this bread/cake anything like hot cross buns? Please educate me on Panettone

It’s like a combo of a sweet bread and cake. This Bundt version is more dense than the kind that are left to rise for many hours and use more butter. I do not find it similar to hot cross buns, but I also love them and have a recipe here on the site!!

So quick to bake, and especially tasty-looking!

I cannot wait to make this gorgeous panettone! It looks perfect!

Panattone sounds amazing. I have never had it before and now I am dying to have a slice.

This couldn't look any more perfect! Easy to make too!

I am so happy to find this! I have added it to my weekend baking list. Cannot wait to try it!

This looks really gorgeous! Can't wait to give this a try!

[…] my Bundt Panettone (ok, it’s not the traditional panettone…but it was wonderful and fun in a bundt […]

Hello, Could I use a tube pan instead of a bundt pan? My bundt pan some how got misplaced during our move. Any idea on how it might affect the bake time?

Hi Kerry-I never baked in a tube pan, so not sure on the exact time. Following the baking instructions I listed should be fine, but I would check it at about 30 minutes to see how it’s doing: Bake panettone for 30-35 minutes, until an internal read thermometer inserted into the center of the bread reads about 200F. Bread will be golden and should spring back when lightly touched.
Happy Baking! XX 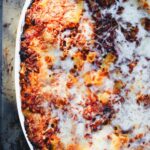 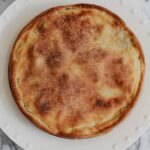 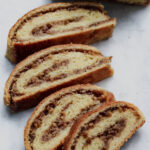