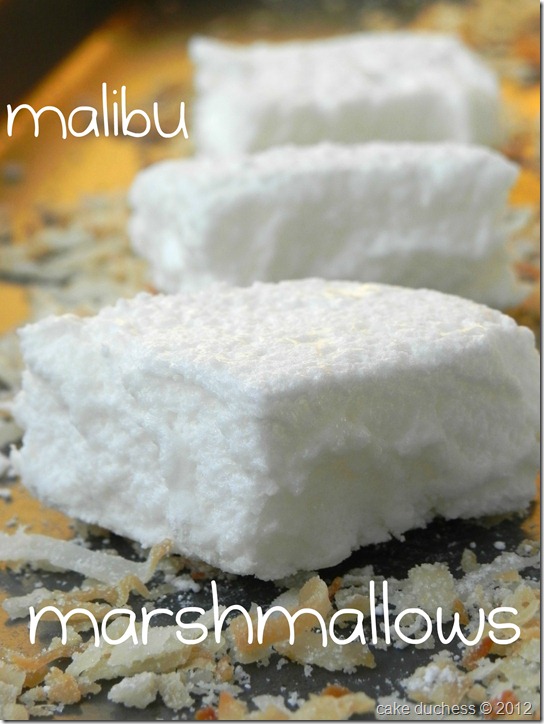 I think it’s pretty obvious from my last post that I have a soft spot for coconut and coconut desserts. I hadn’t planned on making that many desserts with coconut in it these last few weeks. It just sort of happened that way.
I was really looking forward to receiving Shauna Sever’s first book: Marshmallow Madness. I got to know Shauna this past year on Twitter and she is a real sweetheart. I remember congratulating on her new book deal when she announced it not too long ago. 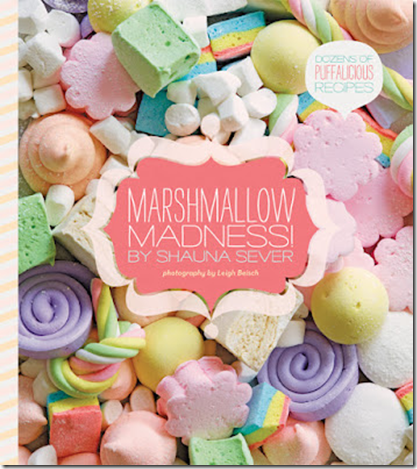 I was excited to see what the book would be all about. Could it be possible to create a book all based on marshmallows? When I took the book out of the envelope, the first thing my daughter did was run off with it. Then she exclaimed, “Mom! The book is so soft and puffy! Like a marshmallow.” And it is…very soft to the touch and then you open the pages to explore all the marshmallow goodness. I didn’t grow up eating s’mores and my parents usually didn’t have any marshmallows in the house. There usually wasn’t any sort of junk food at all in the house…period. No Twinkies or Hostess Cupcakes; my mom baked and we never missed the store-bought treats.
The same goes for my family and my kids. But my kids do know marshmallows from eating s’mores some recent summer nights when we roast them with our neighbors. I usually don’t make the marshmallows homemade as it’s always a last minute late at night idea, “Hey! Who wants to roast marshmallows?” Would it be 100x better with homemade marshmallows…DEFINITELY! 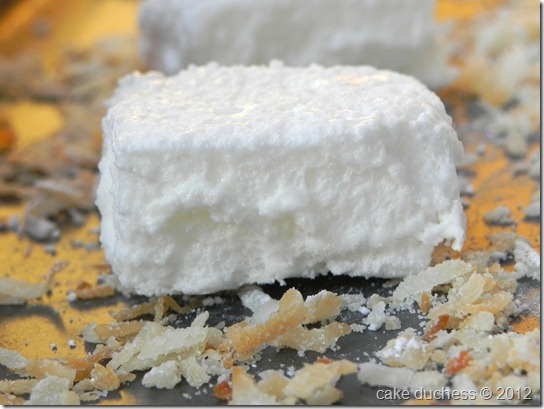 If you love marshmallows you will LOVE Shauna’s new book. Shauna’s book is full of fun marshmallows inspired by desserts and kids in candy stores. There are entire chapters created for the marshmallow connoisseur, the cocktail drinker and my personal favorite, the chapter for all of us fruit lovers! Shauna has even created sweet vegan marshmallow options. She teaches you how to make mini-marshmallows and braids even homemade graham crackers. I can’t guarantee my next batch of s’mores will have homemade graham crackers, but they will definitely include homemade, puffy marshmallows.
Most of Shauna’s recipes are made without egg whites. Shauna explains that the gelatin based recipes are more sturdy and they are better for people that suffer from egg allergies or are those that want to avoid raw egg whites. Egg white based marshmallows do a have a little extra puff to them and I will share my other marshmallow experiment in a future recipe. 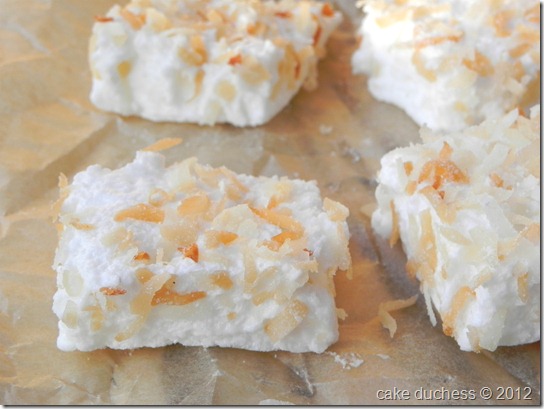 The next marshmallow from the book I’d like to conquer is this: Sea Salt Caramel Swirl! 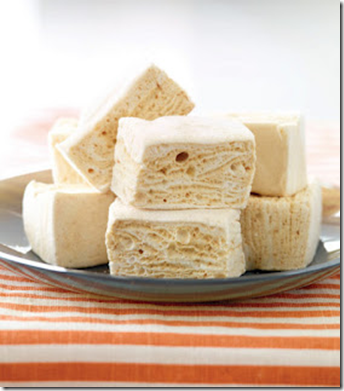 photo courtesy of Quirk Books.
Here are some of the flavors you will find in this puffalicious book:

A big thanks to the kind folks over at  Quick Books for providing me with a review copy. My review copy was complimentary, but my onions were all my own.

To coincide with the launch date for the book (released 2/28), they also have a Marsh Madness campaign going on that you can follow along on twitter with the hashtag: #MarshMadness.

Directions:
Lightly coat an 8-by-8-inch baking pan with cooking spray. Spread about 1/2 cup toasted coconut evenly on the bottom of the pan.

Whisk the gelatin together with the coconut water and coconut rum in a small bowl. Let it soften for 10 minutes.

Stir together the sugar, 1/4 cup of the corn syrup, coconut water, coconut rum, and salt in a medium saucepan over high heat. Boil, stirring occasionally, until it hits 240 F. Meanwhile, pour the remaining 1/4 cup corn syrup into the bowl of an electric mixer fitted with the whisk attachment. Microwave the gelatin on high until completely melted, about 30 seconds, and pour it into the mixer bowl. Set the mixer to low and keep it running.

When the syrup reaches 240 F, slowly pour it into the mixer bowl in a steady stream. Increase the speed to medium and beat for 5 minutes. Beat for 3 minutes more at medium-high speed. Beat on the highest speed for 1 to 2 minutes more, adding the vanilla. The finished marshmallow will be more than doubled in volume. Pour it into the prepared pan, using an offset spatula to smooth it into the corners. Sprinkle toasted coconut generously over the top. Let set for about 6 hours in a cool, dry place.

Use a knife to loosen the marshmallow from the edges of the pan. Invert the slab onto a work surface. Cut it into pieces and dip the sticky edges in more toasted coconut.

*Toast the coconut by spreading it in an even layer on a small baking sheet and bake at 350 F for about 6-9 minutes. Stir often and do not leave the kitchen for a minute while it’s baking. It can go from perfectly browned to burnt in a matter of minutes.