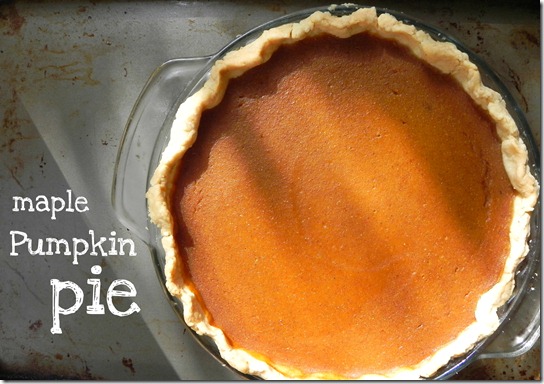 I had some pie recipe testing to do this week. I make the same pumpkin pie every year. It’s a keeper kind of recipe. This year I had to come up with a vegan pie to bring to our friend’s house.
I wasn’t sure how the filling would be. I couldn’t imagine it without the eggs and the evaporated milk. Now I can no longer imagine it with them. This recipe is delicious.
I made the crust and I ended up not having time to roll it out the same evening. It was in the refrigerator until the next morning and I’m so happy I waited. The dough was very easy to work with. The perfect crust for the delicious creamy filling. I declare this my new favorite pie recipe. 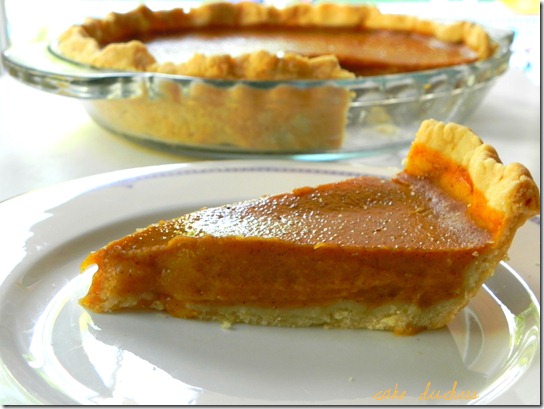 If you are looking for a traditional pie recipe, this one never lets us down. Always reliable and also delicious. If you are trying to cut back on eggs and butter, give my Vegan Maple Pumpkin Pie a try. You won’t be disappointed.

Believe me when I tell you the pie was even better chilled over night. CRAZY good pie. Fabrizio’s eyes light up when he took a bite. I then told him it was vegan. He smiled while finishing his slice. Didn’t bother him one bit.

Here is a super link  from The Art of Pie on how to make a pie crust. This post is full of fantastic links. I hope you will find it helpful when you make your pies.

I found this recipe on Vegan Spoonful for a vegan pumpkin pie. I adapted the recipe a little and adjusted the recipe to reflect the spices as it is on my traditional pumpkin pie. We like our pie to be spicier and added more while mixing. Since the batter is egg-free, I felt comfortable tasting it as I adjusted and added more cinnamon and pumpkin spice. Make your pie according to your palate. 🙂 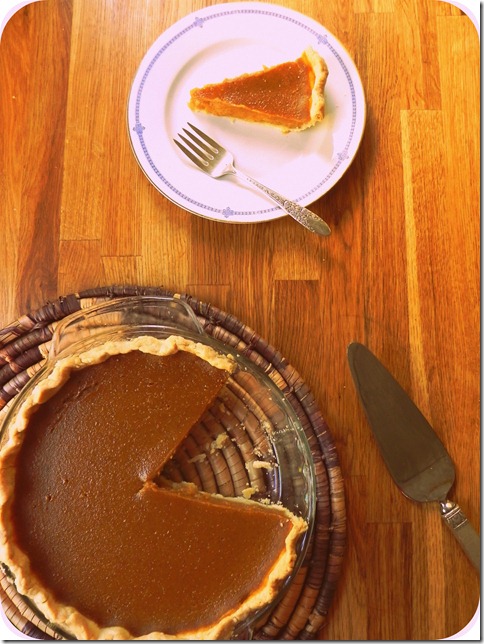 Pie crust directions:
Food processor directions: Put flour and salt in bowl of machine. Cut veggie spread into flour. Process a few seconds until mixture resembles coarse meal. Drop by drop add the water, processing very briefly until it starts to clump together. The whole process would take 20 to 30 seconds. Wrap and chill the pastry for at least 1 hour.

If pastry has been chilled for a long time, let it sit at room temperature for at least 15 minutes before rolling.
Lightly flour a pastry board, marble counter, or kitchen counter. Divide the pastry in half. Pat the pastry into a flat round. Lightly flour the rolling pin. Roll pastry in one direction only, turning pastry continually to prevent it from sticking to the surface.

Using pie plate as a guide, measure rolled-out pastry — it should be slightly larger than the pie plate and 1-8-inch thick. Fold rolled pastry circle in half so you can lift it more easily. Unfold, gently fitting the pastry into the pie plate, allowing pastry to hang evenly over the edge. Crimp the edges. 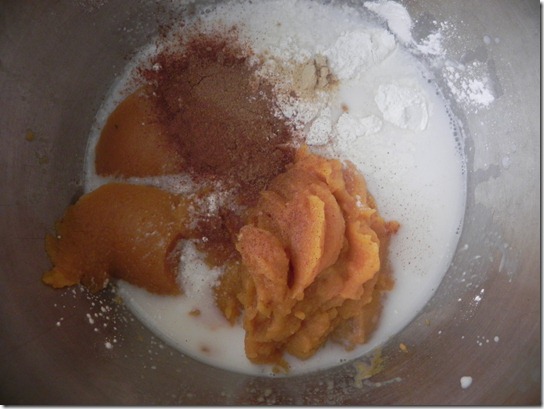 Pour pumpkin mixture into the unbaked pastry shell, and bake for about 60-70 minutes. 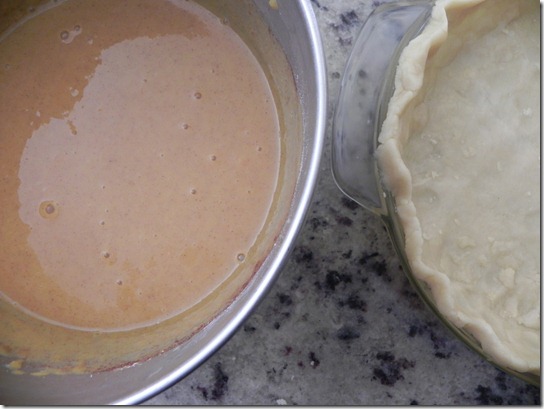 Check on the pie after 30 minutes. If crust is already a nice golden color, tent it with foil paper so it won’t brown too much during the rest of the baking. Let cool completely and then refrigerate overnight. We didn’t have the patience to wait until it was chilled and it enjoyed it when it cooled completely.Serve with your homemade whipped cream.

How’s your Thanksgiving preparations going? If you’re cooking, what is on your menu this year or your favorite dish to make? 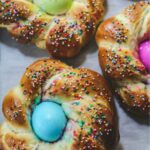