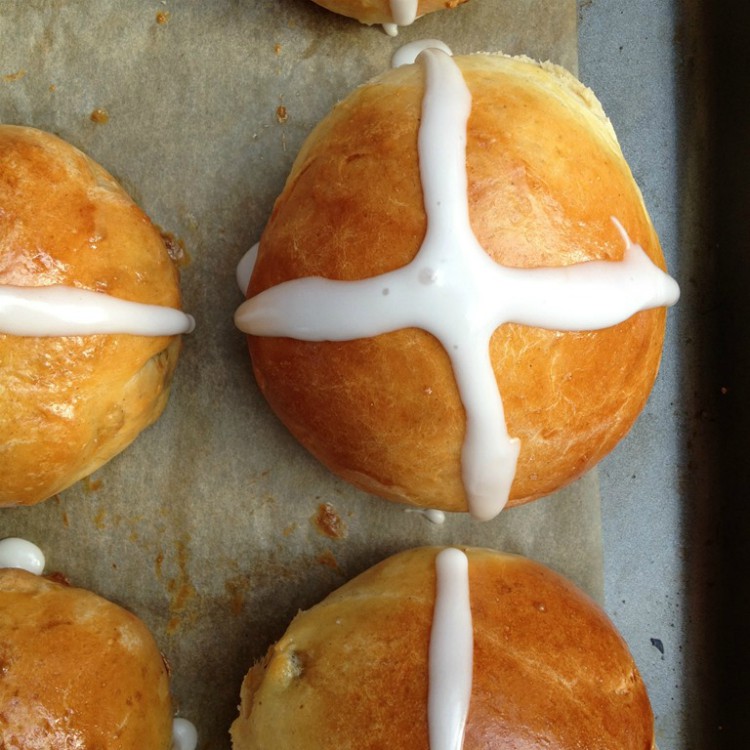 Creating a bread baking group has some major benefits. One benefit is talking about bread with other bread baking fans. A significant benefit is knowing that once a month you are guaranteed to have fresh bread baking in your kitchen.

Where did February go? I swear I blinked it was gone! So here we are at another #TwelveLoaves challenge…are you as excited as we are? 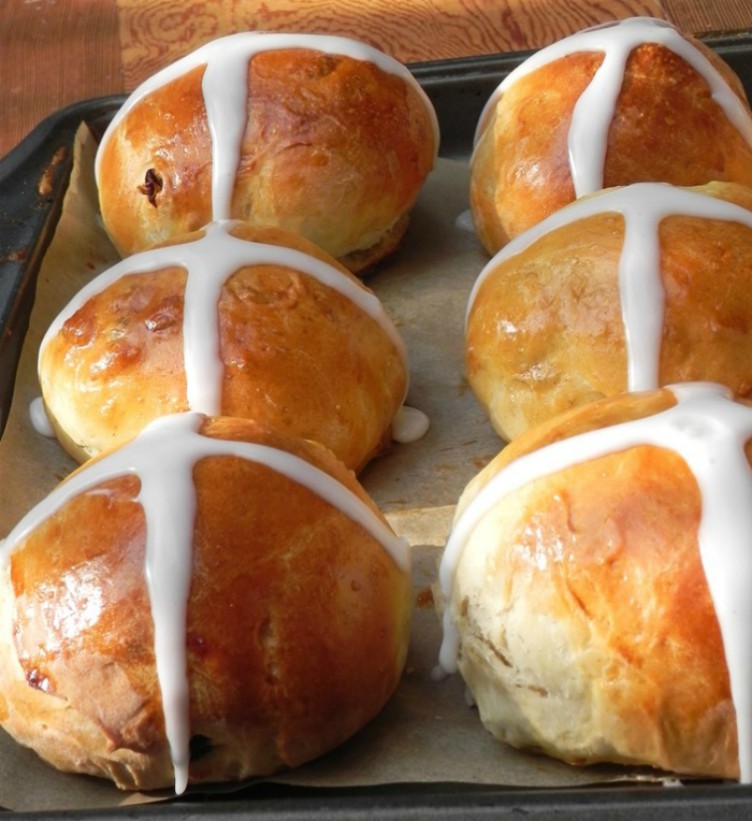 What is baking this March in the TwelveLoaves kitchens? Holiday Breads!

#TwelveLoaves March: Holiday Bread. Bake a bread, yeast or quick bread, loaf or individual. This #TwelveLoaves is all about the incredible holiday breads featured in March. Do you have a favorite Easter or St. Patrick’s Day Bread? We would love to see it. Let’s get baking!

Look at what our very talented #TwelveLoaves bakers have created this March! 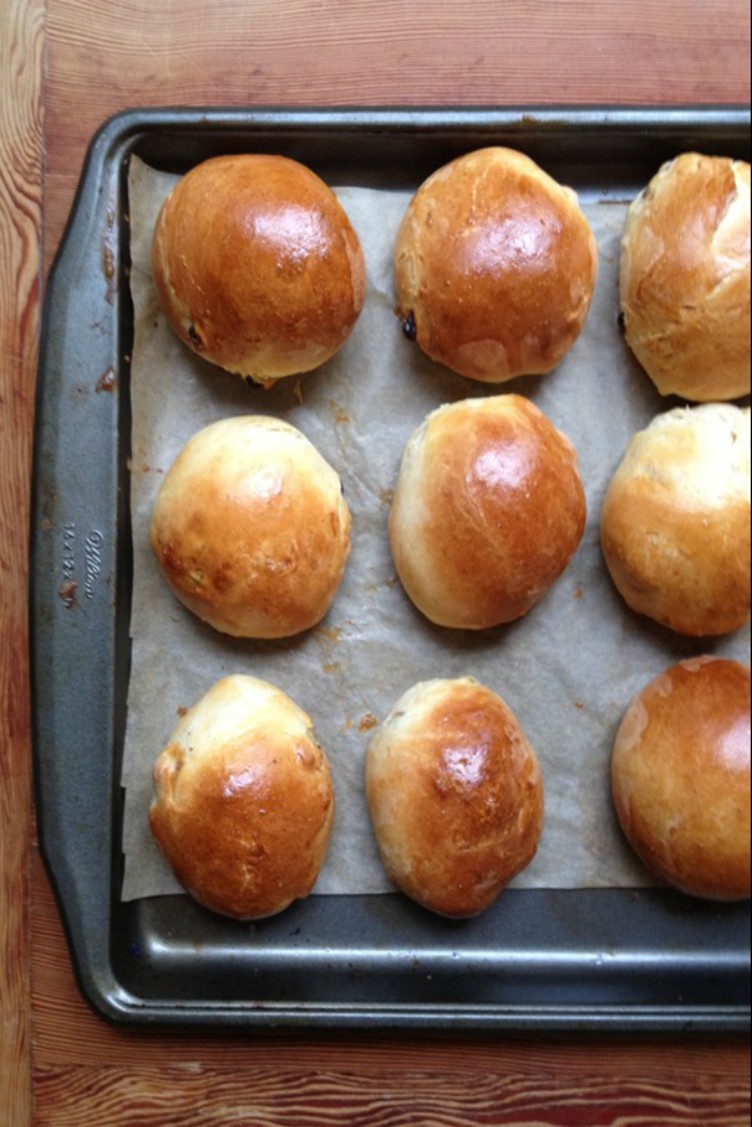 A little history about hot cross buns I found here:
“The pagans worshipped the goddess Eostre (after whom Easter was named) by serving tiny
cakes, often decorated with a cross, at their annual spring festival. When archaeolgists excavated the ancient city of Herculaneum in southwestern Italy, which had been buried under volcanic ask and lava since 79 C.E., they found two small loaves, each with a cross on it, among the ruins. The English word “bun” probably came from the Greek boun, which referred to a ceremonial cake of circular or crescent shape, made of flour and honey and offered to the gods. Superstitions regarding bread that was baked on Good Friday date back to a very early period. In England particulary, people believed that bread baked on this day could be hardened in the oven and kept all year to protect the house from fire. Sailors took leaves of it on their voyages to prevent shipwreck, and a Good Friday loaf was often buried in a heap of corn to protect it from rats,mice, and weevils. Finely grated and mixes with water, it was sometimes used as a medicine. In England nowadays, hot cross buns are served at break are served at breakfast on Good Friday morning. They are small, usually spiced buns whose sugary surface is marked with a cross. The English believe that hanging a hot cross bun in the house on this day offers protection from bad luck in the coming year. It’s not unusual to see Good Friday buns or cakes hanging on a rack or in a wire basket for years, gathering dust and growing black with mold–although some people believe that if the ingredients are mixed, the dough prepared, and the buns baked on Good Friday itself, they will never get moldy.”
—Holiday Symbols and Customs, Sue Ellen Thompson, 3rd edition
[Omnigraphics:Detroit] 2003, (p.233)

My favorite I found…these old recipes for Hot Cross Buns:

“Good Friday Buns
(Commonly called Hot Cross Buns). –Rub a quarter of a pound of butter
into two pounds of flour. Add a pinch of salt; then mix a wine-glassful
of fresh, thick yeast with a pint and a half of warmed milk; and stir these into the flour til it forms a light batter. Put the batter in a warm place to rise. When sufficiently risen, work into it half a pound of sugar, half a pound of currants, half a nutmeg, grated, and a quarter of an ounce of powddered mace. Knead these well into the dough, make it up into buns, and place them on buttered baking-tins. Make a cross on them with the black of a knife, brush a little clarified butter over the top, and let them stand a quarter of an hour
before the fire. Bake in a good oven. When bread is made at home, hot cross buns may be made by mixing the currants, with bread dough after it was risen. Time, one hour to let the dough rise; twenty minutes to bake. Sufficient for two dozen buns. Probable cost, 1s. 6d. for this quality.” (p. 260)
—Cassell’s Dictionary of Cookery with Numerous Illustrations [Cassell, Petter, Galpin & Co.:London] 1875

I love that they specify using a “wine-glassful of yeast”. Drink a little wine…bake a little bread. 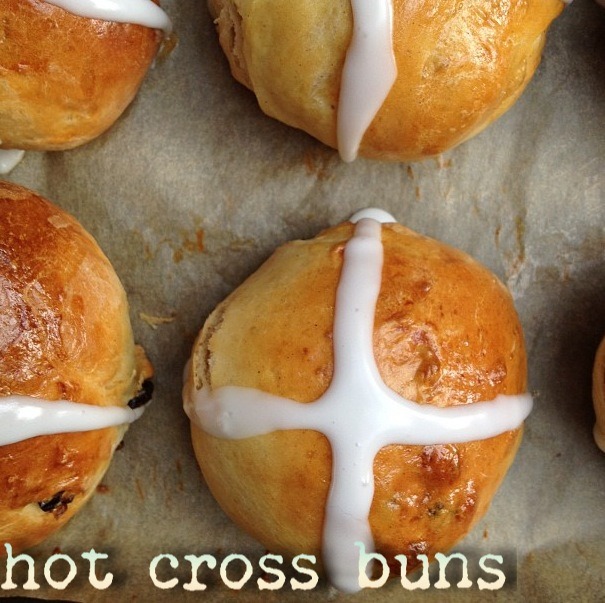 I had a very enthusiastic surprise helper at 7 who would rather help me bake then finish getting ready for school. 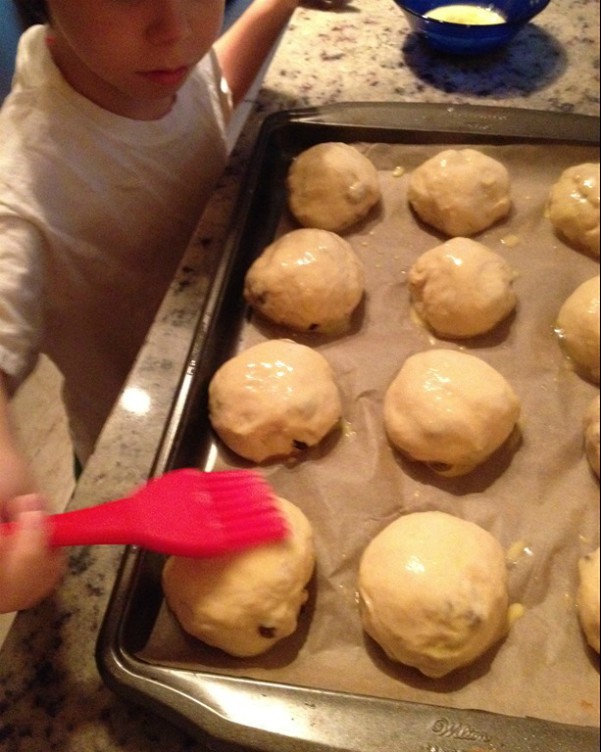 some baking notes: I was being completely serious when I asked where in the world did February go. I knew the March #TwelveLoaves challenge was approaching. I had so many ideas. SO many Easter bread ideas. I was thinking of a bread from every single country on this planet. I finally settled on these buns I’ve always wanted to make.

I know the next time I will add chocolate in it. I used the same dough I use for my cinnamon rolls. You could adjust the spice to your liking. I ended up making the dough at 10 PM. I put it in the fridge and could not WAIT for the this morning to bake them. I may have added a dash too much of nutmeg. At least it seemed I did because the scent was so strong as it was baking. It was definitely not too much nutmeg and these buns were divine. I felt bad warming hubs to not take one until I photographed them. He said I was a mean and selfish baker. I snapped some shots and let him dig in. The kids had to wait until after school to try one and they LOVED them. If you need some photos on shaping the rounds, check out my Savory Corn Roll post.* some other Easter inspirations from me: I’ve previously posted some Easter breads. This is one that my mother-in-law Teresa makes. I linked to some amazing breads in this post.  The kids and I can’t wait to make this Easter bread stuffed with eggs.

Another idea you could try for Easter is this Pastiera Napoletana…amazing!

Directions:
Heat the milk in a small saucepan over medium heat until it just begins to boil. Remove from heat and let stand until cooled to room temperature.  Meanwhile, sprinkle the yeast over the warm water in a large bowl.

Add 1 Tablespoon of the sugar and let stand until foamy, about 5 minutes.

Beat in the remaining 2 Tablespoons of sugar, eggs and butter.  Beat in cooled milk.  Gradually add the flour, salt and spices, scraping down side of bowl, until a soft dough forms. On low speed, beat in the raisins.

Turn dough onto a floured work surface and knead the remaining flour into the dough, adding more flour if too sticky.  Knead for about 10 minutes until smooth. The dough will be soft.

Grease a large bowl. Place the dough in the bowl. Cover with plastic wrap and place in a warm spot until doubled in size, about 1 1/2 hours.( I ended up putting the dough in the refrigerator over night. I took it out in the morning and let it sit on the counter for about 15 minutes before punching it down)

Punch down the dough and shape it into 12 small rounds.  Place the buns on a parchment-lined baking sheet. (Be sure to leave enough space so that as they bake and rise they won’t touch each other). Cover the tray with a tea towel and leave it in a draft-free spot until the buns have about doubled in size (about 40-60 minutes).  Brush the buns with the egg wash.

Preheat oven to 375 degrees. Brush the tops of the buns with the egg wash. Bake until golden brown (about 20 minutes). Let the buns cool. While cooling, prepare the glaze.

Glaze: Mix together the confectioners sugar and milk until you reach the right consistency (not too runny, not too thick).  Place the glaze  small plastic bag and snip off a corner on the bottom (not too big of a cut). Pipe a cross on each bun. Aren’t they gorgeous!?! 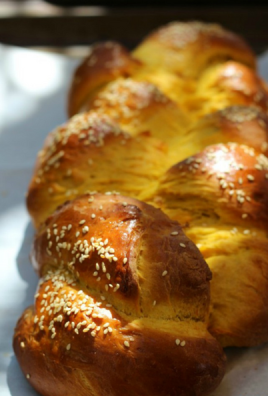 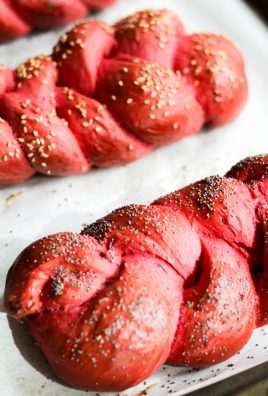 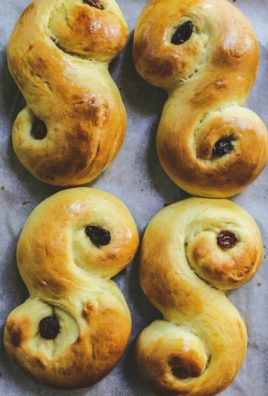 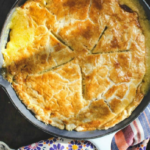 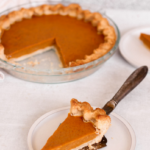 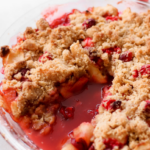 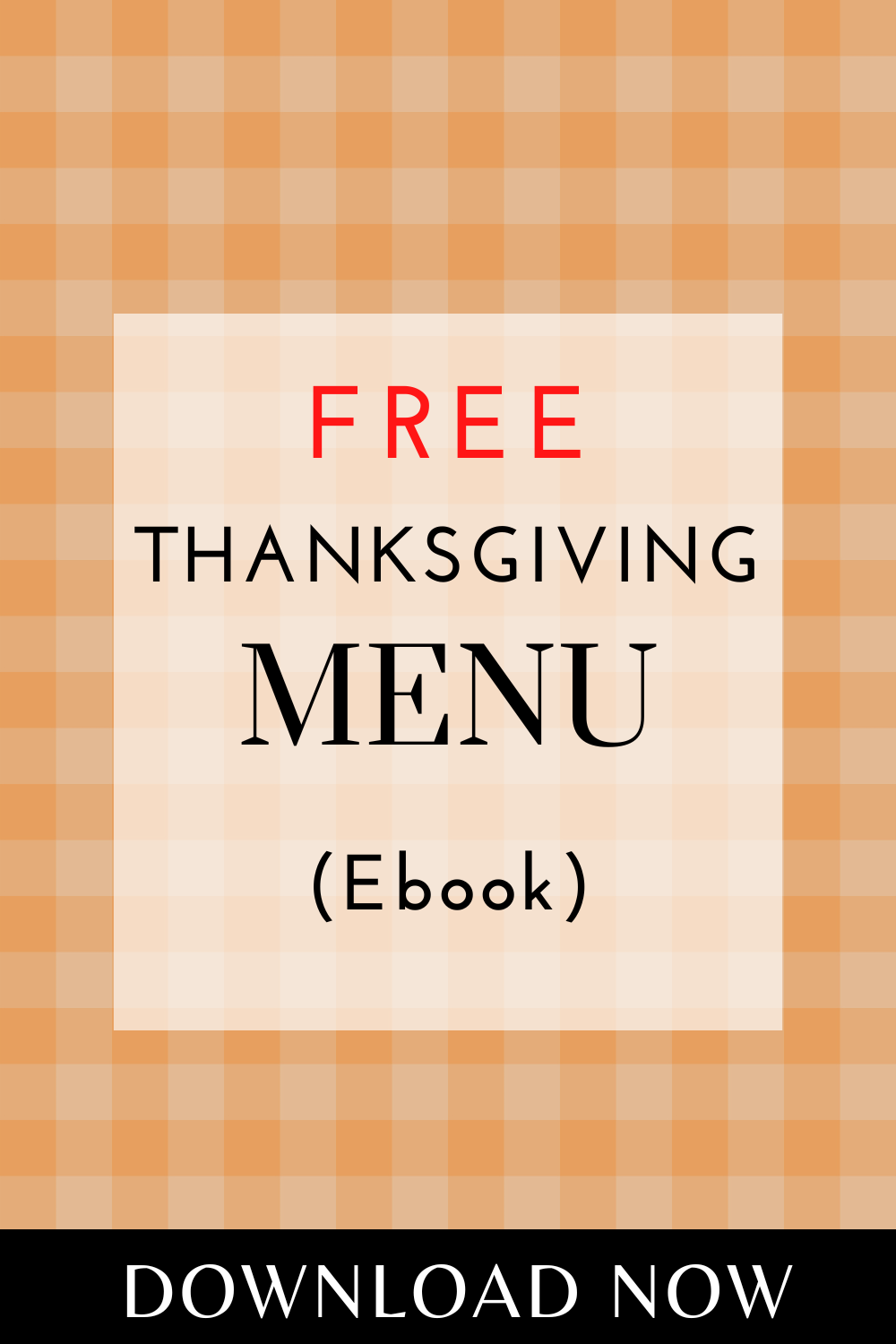 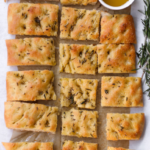