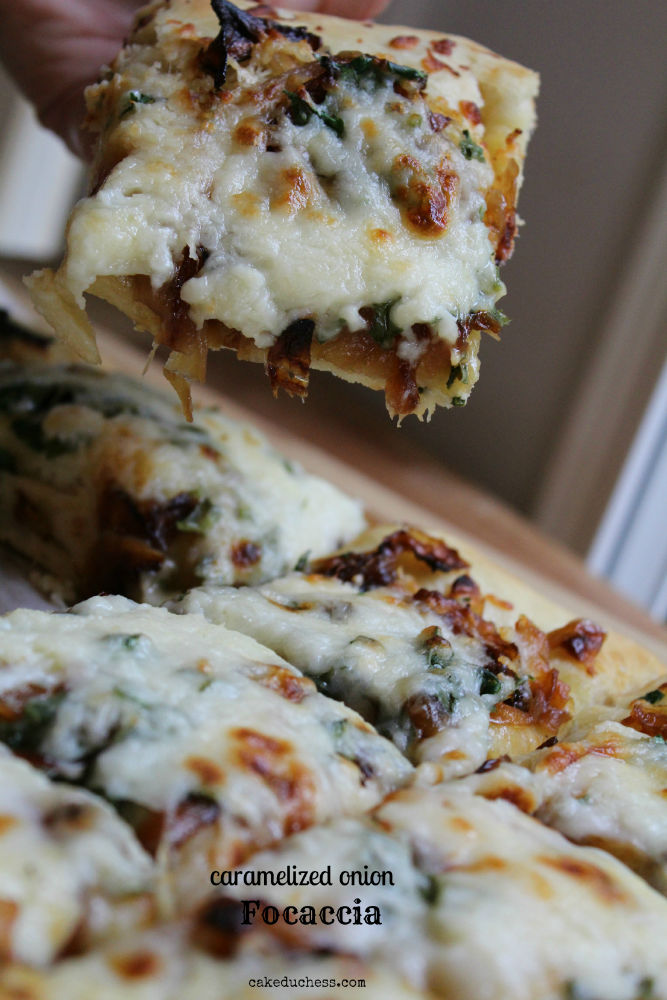 I seem to be making many things with caramelized onions these days. But by far, my favorite way to have them recently is this caramelized Vidalia onion focaccia I’m sharing here with you today!

Vidalia onions have a very distinctive sweet taste to them. I think they make just about any recipe taste a little better! I add them caramelized to soups and to sauces. And my most favorite way to use them is topped on pizza and focaccia! 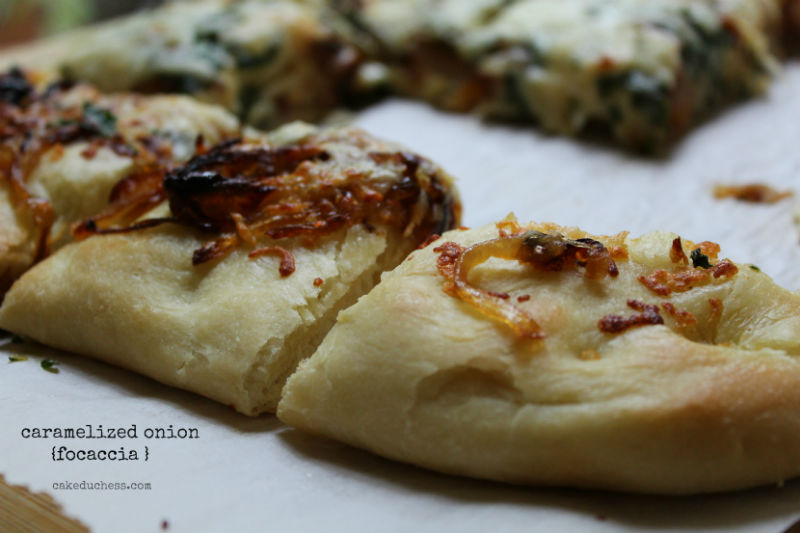 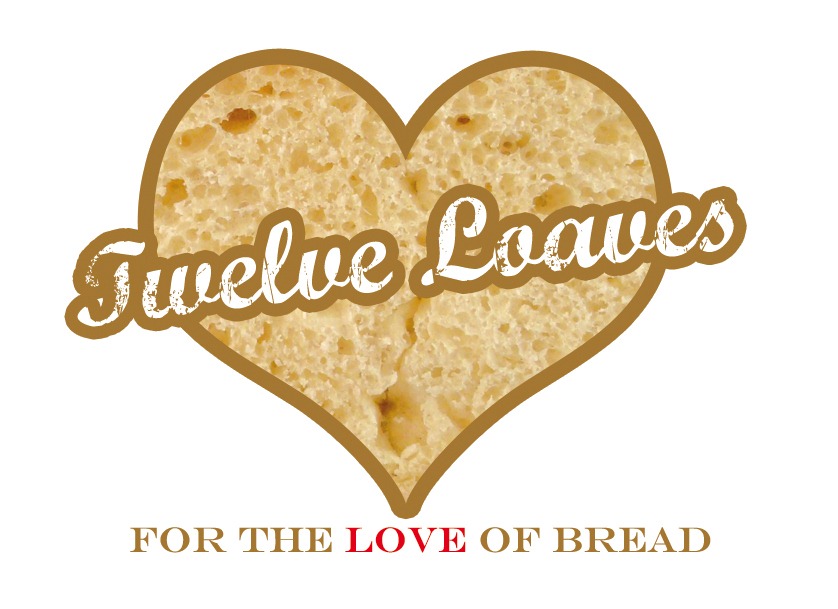 Amazing breads we baked for the October 2013 #TwelveLoaves event: 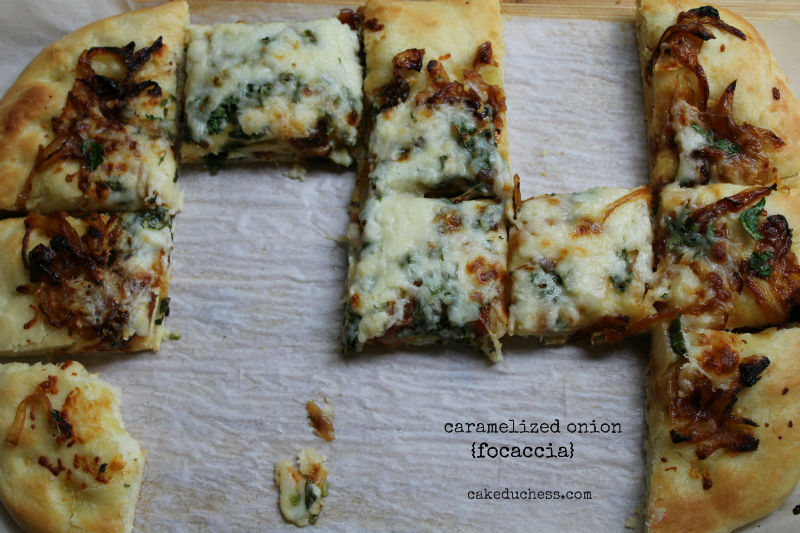 When it came time to decide what to bake with our Root Vegetable theme, I have to say I was definitely leaning towards a bread with potatoes. 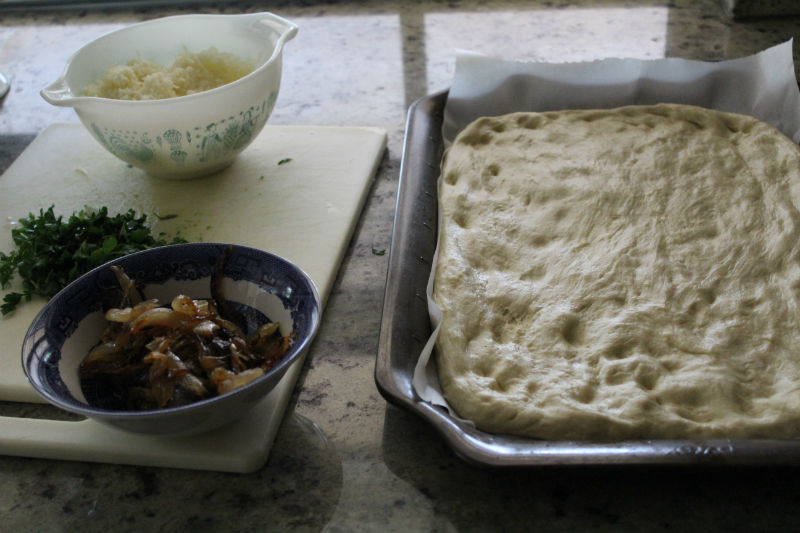 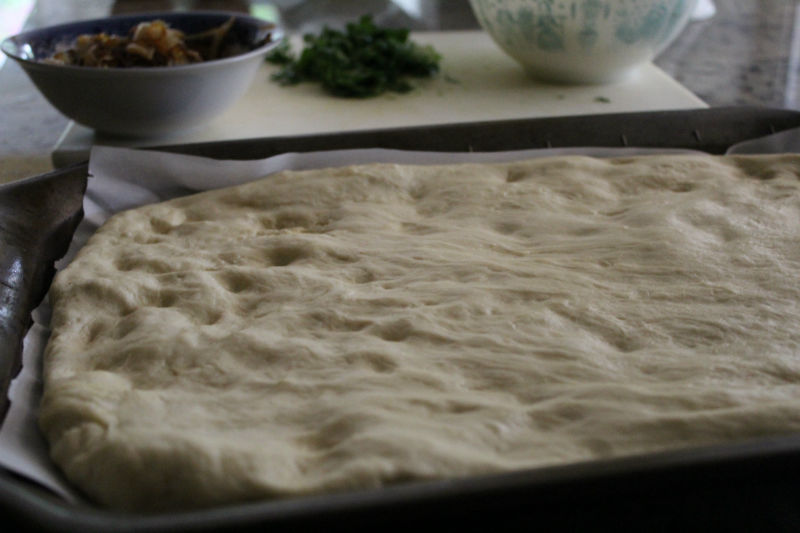 Immediately didn’t happen…but a couple of nights later I did decide to bake something similar. I made the focaccia recipe I always make.  I had to caramelize onions because, well, that’s what we do here pretty often. I had two different types of mozzarella cheese around and went for the shredded version. The fresh mozzarella can be runny sometimes. And I didn’t want a runny bread to share with all of you! What was the verdict? Hubby proclaimed I made a fantastic: “focaccia Genovese just like my zio Antonio makes”. His zio Antonio is a stellar bakery with a few pastry shops in Italy. That was taken as a huge compliment.
The focaccia was my dinner. Really, there wasn’t any thing else I wanted to eat after I took a bite of this fluffy, cheesy, just the right sweet Vidalia onion caramel sweetness, bread. I think you should make it too!
Caramelized Vidalia Onion Focaccia
by Savoring Italy
Prep Time: 2-2 1/2 hours
Cook Time: approx 30 minutes
Ingredients (one 101/2 x 151/2-inch jelly r)

Instructions
one 101/2 x 151/2-inch jelly roll or a 14-inch round pan (for my round one, I used a 9-inch cake pan and it was very fluffy. The kids loved it!)
In a small bowl, add the water and sprinkle the yeast on top of the water. Add 3 tablespoons of the oil and whisk together. Set aside.
In large mixing bowl, add the flour and 3 teaspoons of salt; whisk together or mix together on low speed in your mixer.
Add the yeast mixture and about half of the flour mixture. Stir with a rubber spatula until it is combined. Attach the dough hook to your mixer and add the remaining flour. Mix on low speed for about three minutes. If the dough seems to be too dry, add warm water a teaspoon at a time until you obtain a softer dough.
Form the dough into a ball and place into an oiled bowl (when I put the dough in the bowl I swish the dough around the bottom of the bowl and then flip it over so all of the dough is covered in a light film of oil). Cover with plastic wrap and let it rise at room temperature until doubled in size (about 1-1 1/2 hours).
While the dough is rising, caramelize the onion if using it for topping.
Caramelize onion:
In a large skillet, heat 1 tablespoon extra virgin olive- oil over medium-low heat. Add the onions to the skillet and sprinkle 1 teaspoon of sugar over it. Stir occasionally and cook until tender (takes about 10-15 minutes
until golden).
Place the dough on a parchment lined pan. Pat and press the dough gently until the dough fills the pan completely. If the dough resists, let it rest for a few minutes before continuing (sometimes the dough can be moody). Cover the dough with a piece of plastic wrap and let it rise again until doubled in size (about 40-60 minutes).
Set a rack in the lower third of the oven and preheat to 425 F.
When the dough has doubled in size, remove the plastic wrap. Dimple the surface of the risen focaccia using your fingertips.
Brush on the remaining olive oil to the surface of the dough. Sprinkle on the sea salt (add the amount of salt you prefer. We like it a little saltier. Sprinkle on the chopped parsley and caramelized onions.
Bake for 12 to 15 minutes or until golden brown and puffed around the edges. Remove the focaccia from the oven and top with cheese. Return to the oven until the cheese is melted, gooey and brown. Bake for about another 12 minutes, or until the cheese is melted, gooey and sort of brown.
Remove from oven. Lift the focaccia from the pan with the parchment paper edges onto a cutting board. You’re supposed to let it cool a little on a rack before serving. That never happens over here. Cut and serve
26shares 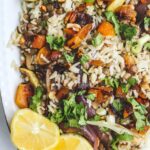